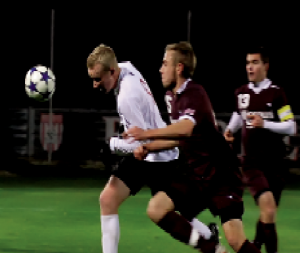 The Bradley soccer team’s season and run of two consecutive NCAA tournament appearances came to an end with a crushing 1-0 loss to Central Arkansas in the first round of the MVC tournament Wednesday night at Shea Stadium.

The Braves reached the NCAA tourney in 2010 by winning the conference tournament and received an at-large bid last season.

“I can’t remember the last time we’ve been eliminated on the first day,” Bradley coach Jim DeRose said. “We return all but three players next year, and hopefully we’ll learn from this. It’s disappointing, but that’s soccer, and it’s certainly something we can grow from.”

Central Arkansas’ Daniel Sampedro snuck a shot inside the right post past Braves’ keeper Brian Billings in the 37th minute to give the Bears the 1-0 advantage.

Bradley had plenty of chances to tie the game in the second half, but could not break through.

Junior midfielder Keegan Balle had a header go off the right post in the 53rd minute then UCA keeper Cody Gibson made a great save on freshman Grant Bell’s shot in the 61st minute. In 73rd minute, another Bell shot was saved this time by a Bears defender. Finally, senior Jochen Graf sent a header off the crossbar in the 84th minute, which was the Braves last real opportunity.

There will be a season wrap-up story in the Nov. 16 issue of the Scout.