Bradley soccer shutout by No. 4 Creighton 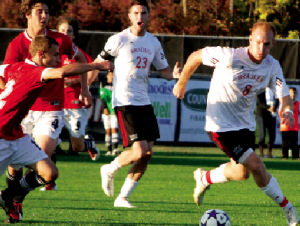 No. 23 Bradley failed to extend its two game winning streak over the Bluejays, losing 1-0 in the rematch of the 2010 MVC Tournament championship game.

An early first half goal by Creighton’s Andrew Ribeiro gave the visitors all they needed in a game affected by wet and windy conditions.

In the 35th minute, Ribeiro received a pass at the top of the box from teammate Jose Gomez. A defensive miscommunication by the Braves gave Ribeiro time to gather and send a 20-yard boot past Bradley sophomore keeper Brian Billings.

Bradley coach Jim DeRose said he is disappointed in the number of scoring chances the Braves have had at times this season.

The one goal decision was the team’s 14th straight.

Bradley was outshot 24-11. The Braves best chance came in the 85th minute when senior Bryan Gaul sent a shot towards the far post but Creighton keeper Brian Holt cut off the angle making a diving save to preserve the lead.

Holt needed just two saves for the shutout. Billings had seven saves against Creighton’s high-powered attack that is 34th in the nation in goals per game.

The Bluejays and Braves have combined for 10 of the last 12 MVC regular season and postseason tournament championships. The teams could meet again this season in the MVC tournament hosted by Creighton.

“It doesn’t matter the sport, you really want to establish your home field as a very difficult place to play,” he said.

Bradley’s record fell to 9-4-2 and 1-2 in the MVC. The Braves lost 1-0 to Drake to open MVC play before beating Southern Illinois Edwardsville 2-1 on a goal by sophomore Wojciech Wojcik.

Bradley will have a week break before hosting MVC leader Missouri State to finish off a four game home stand Wednesday night at 7 p.m.