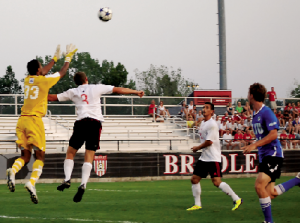 Playing one-goal games is nothing new for the Bradley soccer team.

For the 10th consecutive match, the Braves finished within one goal of their opponent, beating New Hampshire 2-1.

Junior forward Jochen Graf contributed two goals in a span of just over a minute.

With Bradley trailing 1-0, Graf scored an unassisted goal in the 62nd minute, chasing down a loose ball in the penalty area before driving the ball to the back of the net.

A minute later Graf assisted freshman Desmond Campbell with a through ball for the game winner. The 1-minute, 16-seconds between goals was the Braves shortest amount of time between scores since 2007.

Bradley coach Jim DeRose said Graf is a major asset to the team.

“Jochen’s work ethic is just incredible,” he said. “And really his goals are just an off shoot of the work ethic he has. For us, team’s try to key on Bryan Gaul and Christian Meza and (Graf) is someone teams are going to have to deal with. That has helped us tremendously.”

Graf is the team’s third leading scorer behind Gaul and Meza. He has six points on two goals and two assists.

The Braves improved their record to 6-2-2 on the season, which is an improvement over their 4-5-1 start a year ago.

The Braves are in the midst of their longest road trip of the season. Bradley will play its fourth consecutive game away from home tomorrow against Drake.

“You can’t win anything significant if you can’t win on the road,” DeRose said. “It’s something we’ve tried to build our program on through the years.”

Bradley is 5-1-1 away from Shea Stadium this season. The Braves lone defeat was to Massachusetts 2-1.

But playing on the road isn’t the team’s only concern. BU opens its Missouri Valley Conference slate against the Bulldogs.

Bradley will return home Oct. 10 to the face the University of Missouri-Kansas City at 3 p.m.