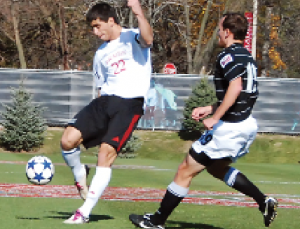 Just 35 seconds into overtime, Bradley junior Jochen Graf broke a tie against No. 8 South Florida to give the Braves, soccer team, a victory over their highest ranked opponent in four years.

The overtime goal in the opening contest of the Dartmouth Classic continued the Braves unbeaten season, and boosted their record to 4-0-1.

The Bulls put the pressure on Bradley early, taking the lead off of a corner kick in the 16th minute. But from then on, the Braves were the aggressors.

Coach Jim DeRose said he was really impressed with how the team controlled the game from the middle of the first half on.

“[Beating South Florida] showed a lot of resolve because I thought for the first 15 minutes we were really on the ropes,” he said. “South Florida is a great team. I thought we earned the goal then kept pressing the rest of the game.”

It wasn’t until the 83rd minute that Bradley tied the score on a penalty kick from senior Bryan Gaul. Then in overtime, senior Christian Meza sent a shot off the USF keeper that was collected and poked to the back of the net by Graf.

In Bradley’s final game of the weekend, the Braves earned their second tie of the season against South Carolina. The score was knotted 2-2 at the end of regulation but neither team was able to find the goal in overtime.

DeRose said the team isn’t going to be distracted by the high expectations from their hot start.

“We constantly talk to the kids about enjoying the process and taking in the whole thing,” he said. “But this is a very grounded group. You aren’t going to see them be headline readers or anything like that.” This weekend Bradley will host the Hotels at Grand Prairie Classic. The Braves will face Memphis tonight and Loyola-Chicago Sunday.

“It doesn’t matter the sport, you really want to establish your home field as a very difficult place to play,” DeRose said. “So for us I think this becomes a really important home weekend because we go on the road for four or five in a row right after this.”