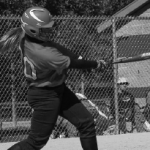 That was the situation freshman Kathryn Spenn found herself in Saturday. On a 2-1 count, Spenn hit an infield single to drive home the game-winning run, junior Brianne Joseph, to give the softball team a 3-2 victory in eight innings against Indiana State.

“I’m stoked,” Spenn said. “Coach was telling me it was just like practice, it’s not any different. So when I went into the box that was my mindset. I’m just looking for a pitch that I can hit well and try to put a good swing on it.”

In the first game of the series on Friday afternoon, the Braves found themselves trailing 3-1 heading into the bottom of the seventh inning. After a walk and a hit-by-pitch, Bradley rallied back. Junior Alex Chandler hit a RBI single to right field, and the Braves scored another run off of a fielding error to tie the game.

In the ninth inning, Chandler hit a walkoff two-run home run to give Bradley a 5-3 victory.

“I think it shows how much heart this team has,” coach Amy Hayes said. “They’ve all been working really hard and they all have a vision of what they want for this year. I think winning those two games, I mean you could hear them talking about it, ‘we are not going to lose this game,’ so it’s a great way to start for us and a great way to start at home.”

In the second game of the double header Friday, Bradley won 2-0 as senior Mackenzie Camp didn’t allow a hit to Indiana State after the fourth inning in a three-hit complete game shutout.
“We are so excited that we could open that way,” Spenn said. “Indiana State is a good team and they played us really hard but we stuck it to them for three games, and we’re really proud of that.”The Braves swept Indiana State, the first time the Braves have earned a three-game sweep versus a Missouri Valley Conference opponent since 2009. Bradley is now 4-1 in MVC play, their best start in conference play since 1986.

Next, Bradley will head to Creighton for a three-game series starting Saturday afternoon. With a 19-12 record, the Braves are only two wins shy of matching their win total from a year ago.

Bradley played five non-conference games against nationally ranked teams, and hope that experience will help them continue their winning ways in conference.

“I think it’s important because our goal is to win conference, our goal is to get to postseason and by doing that we may see some of those teams again,” Hayes said. “I want this team to be prepared, I want them to know that if we expect to be one of the best teams we need to beat the best teams.”