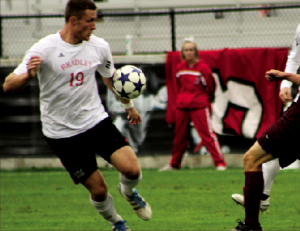 Bradley soccer coach Jim DeRose said at the beginning of the season he didn’t expect his team to finish the year undefeated.

He was proven right last Friday night at Shea Stadium as the Braves suffered their first defeat to Memphis 1-0.

DeRose said the game was similar to the other games Bradley has played against top teams this year.

“In games like that, there aren’t going to be a lot of scoring opportunities when two good defending teams play each other,” he said. “If you look at the game, there was two scoring chances for each team.”

In a scoreless game in the 62nd minute, junior Matt Kuehl gave the Braves a chance to take the lead. The defenseman took a long throw but his back header clanked off the crossbar and Memphis was able to clear the ball away.

The Tigers struck in the 80th minute when Mark Sherrod took a long pass and lost his shoe at midfield. But Sherrod was able to gather himself, and nail the shoeless kick into the back of net to give Memphis the victory.

DeRose said the team needs to keep working on its attack to create goals for the Braves.

With a game less than 48 hours later, Bradley did not have time to stew over the loss. The Braves responded by beating Loyola 2-1 to bring the team’s record to 5-1-2.

“This was another game where we go up 1-0 then they tie it and we get the game winning goal,” DeRose said. “I was proud of our toughness. We went deep into our bench and I thought our substitutes were the key in that match.”

The Braves scored their first goal when senior Bryan Gaul took a ball off his chest, with his back to the goal, then spun on his right foot and used his left foot to drill a laser to the back of the net.

In the 77th minute, sophomore Ross Williams found Campbell at the top of the box. Campbell’s shot snuck by the keeper for his first Bradley goal and propelled the Braves to its fifth win of the season.

Bradley’s next game is this afternoon at 4:30 p.m. on the road at Western Illinois.