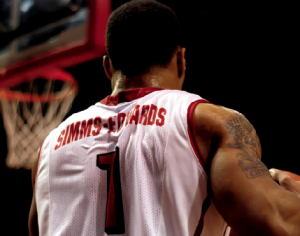 Braves’ coach Geno Ford said he was disappointed with the number of shots the team allowed Averkamp to take.

“You can’t allow the other team’s guy to get 20 shots,” he said. “We were slow rotating a few times and you just can’t allow him [Averkamp] to get that many touches in the flow of the game.”

Both teams were without a key senior. Bradley’s Taylor Brown and Loyola’s Walt Gibler were each sidelined with injuries. Brown is the Braves’ leading scorer at 14 points a game, while Gibler pours in 12 points a contest.

“We’re offensively challenged with him [Brown] so obviously when you don’t have him it’s going to continue to be that way,” Ford said. “I think it [Brown’s absence] disrupted us defensively on the interior a little more.”

This was the second time in four years that the Ramblers and Braves were paired in the BracketBusters series with the two teams splitting the meetings.

With the loss, Bradley fell to 7-22 on the season.

It was a back-and-forth affair throughout the first half with the Ramblers taking a 23-22 lead at halftime.

Loyola used a quick 10-0 run in the second half to open up a nine-point lead that they never relinquished. The Braves were able to cut the lead to as little as four points at 35-31 with just under 12 minutes left but never got closer.

The Ramblers dominated the paint, outscoring the Braves 36-14. Loyola also won the rebound battle 36-27 and Bradley turned the ball over 12 times to the Ramblers 13.

“He’s [Crawford] continued to get better during the stretch run of the season,” Ford said. “We’ve got a lot of young guys playing that are playing a lot of minutes and they’ve got to continue to improve.”

The Braves only have one regular season game remaining with that coming at 1 p.m. tomorrow afternoon against I-74 rivals Illinois State.