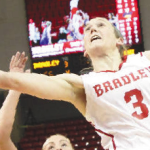 Irish soccer player Austin O’Malley may have said it best when he said, “If you learn from a loss, you have not lost.”

That would make the Bradley women’s basketball team undefeated.
That’s not the case, however. The team split its two games last weekend, holding off rival Illinois State 59-58 Feb. 27 before falling to Indiana State 73-60 March 2.
Bradley started the game hot, hitting just less than 43 percent of their shots in the first half. The team ended the first half on a 15-1 run and took a nine point lead into halftime.
The tables turned in the second half, however. The Braves shot just 28 percent in the second half and watched the Redbirds pull back into the game. That’s when freshman Leti Lerma took over.
Lerma totaled 17 points, six of which came in the final four minutes. She also grabbed six rebounds and a steal.
The steal, as it turns out, was an important one. After a three-pointer by the Redbirds tied the game at 58, senior Kelsey Budd hit one of two free throws to give the Braves the lead. That set up Lerma and her game-winning play.
“Illinois State had drove baseline and I saw her pass the ball in, and I just kind of grabbed it away,” Lerma said.
The Braves held a 38-34 edge in rebounds against the Redbirds, which led to 19 second chance points. The rebounding totals, and result, were much different Sunday.
The Braves were out rebounded Sunday 49-23, leading to 28 second-chance points for Indiana State. Coach Michael Brooks said he knew that rebounding would be crucial against the Sycamores.
“They outrebounded us last time,” he said. “That and limiting turnovers were the things we needed to take care of. We did one of those, but we didn’t have the will to go get the defensive boards.”
A lack of will, especially away from Renaissance Coliseum, has been an issue at times for the Braves this season. It seemed to start early against Indiana State.
“In the first four minutes of the first and second halves, we got beat 24-4. That right there is the game,” Brooks said.
As much publicity as the men’s road woes get, it’s easy to miss the fact that the women’s team isn’t much better. The loss to the Sycamores dropped the team to 3-11 away from campus.
Brooks has made adjustments to the gameplan, but it’s up to the players to follow through. So far, they haven’t.
“Our gameplan is to come out and trap, to come out and be the aggressors because our team has shown specifically on the road they can’t do it. The problem is the execution of the gameplan,“ Brooks said.
The win over Illinois State Feb. 27 doesn’t mean all that much to Brooks. It’s better than a loss, but the team isn’t content for just victories over rivals, he said.
“It’s not about beating Illinois State; they’re just another team,” he said. “We expect to beat Drake, UNI and Wichita State. We have before. I could care less about that high school team down the road.”
Bradley has one more game left in the regular season. The team faces Southern Illinois Saturday at 2 p.m. at the Renaissance Coliseum.