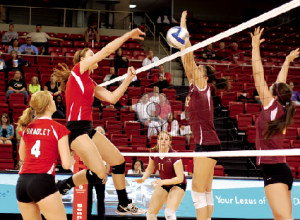 After getting stuck in an eight-match losing streak, the Bradley volleyball team has broken out of its rut with two consecutive wins.

“I thought everybody stayed focused and played on our side of the net,” coach Jenny Maurer said. “Our team played at very different speeds and has different strengths. We did a good job of that and maintaining our focus.”

Senior Megan Schmidt led the Braves with a career-high 17 kills and the squad had an overall .352 attack percentage, which was its best output since 2009.

“It was awesome,” Schmidt said. “It was a good feeling being able to hit that much and do so well. Hopefully I keep it continuing for the next few weekends.”

Senior Rachelle Dejean topped Bradley with 12 digs, moving her into a tie for third all-time in career digs, and only 33 digs from becoming the Braves’ leader.

“It’s cool to know that I’m contributing to something that may exist when I’m not here at Bradley anymore,” Dejean said. “But I don’t want to let that be my focus, because my focus is to improve for my team on and off the court.”

Freshman Courtney Keefe led the Braves to the win over the Sycamores with career-high totals of 11 kills and 19 digs. With the strong effort, Keefe was named the Missouri Valley Conference Freshman of the Week.

“It was incredible having everyone saying congratulations all of the time, and knowing that I worked hard to earn it,” Keefe said. “I have a great team to back me up on every single play so it’s a really good feeling.”

Bradley is on the road for a pair of matches at Wichita State tonight and Missouri State Saturday.

Both teams have already defeated the Braves in Peoria and the Bears are second in the Missouri Valley with an 8-2 record in conference action and 15-6 overall.

“Right now we are just working on being consistent, and I think we are climbing that ladder,” Keefe said. “If we keep it up like we are going right now, we are going to be where we want to be by the end of the season.”