Braves are dancing once again 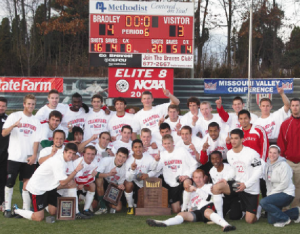 For the second consecutive season, the Bradley Braves soccer team will be one of 48 teams in the nation to compete in the NCAA tournament.

After winning the Missouri Valley Conference’s automatic bid a year ago, the Braves received an at-large bid Monday afternoon.

“We’re extremely excited,” coach Jim DeRose said. “One of the things I’ve told this group of seniors is that they’ve done a great job, particularly over the last two years. The first Bradley team to go to back-to-back NCAA tournaments shows the great resolve and hard work this group has put in.”

After losing in the semi-final of the MVC tournament to Creighton 1-0, the Braves were forced to sweat out the weekend and wonder if they had done enough to make the NCAA tournament.

“There was a crazy amount of anxiety,” senior forward Bryan Gaul said. “I couldn’t sleep and I talked to a couple kids on the team and they couldn’t sleep either. Just thinking about it and seeing all the projections on websites was just nerve racking. To see your name come up on the screen on the projector was just great.”

DeRose said it was a very long couple of days leading up to the announcement.

Bradley is making its sixth appearance in the NCAA tournament and the Braves have a 2-5-1 record in those games.

The Braves hosted Loyola-Chicago Thursday night in the first round of the NCAA tournament. Bradley defeated Loyola 2-1 at Shea Stadium earlier this season.

DeRose said Loyola isn’t the same team the Braves faced in September and he expected a hard fought game.

“It’s a team from Chicago which means a lot of our guys know each other that played on the same club teams,” DeRose said. “I think that’s a great thing. Nobody’s going to be intimidated by anybody. We know each other well and certainly as I mentioned they’re very hot right now.”

The last time Bradley had a home tournament game was in 2007 defeating DePaul 2-0 to start its magical run to the Elite Eight.

In last year’s first round, Gaul was unable to play due to a red card suspension. This season, the Braves will have their leading scorer on the field.

“There’s no excuses but when you play without your best player and your leading scorer there is a trickle down effect,” DeRose said. “Everybody has to do more but at the same token defending teams can focus on players who maybe don’t have the same experience as Bryan. So we’re super excited to have him there and ready to go.”

Gaul said to reach the NCAA tournament in his senior season means everything.

“It’s a great way to go out,” he said. “Being in the NCAA tournament in your senior year is just crazy. I’m really excited.”

With a win over Loyola, Bradley will play Sunday on the road against Louisville in the round of 32.