Braves’ Balle shines on the field 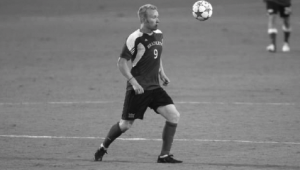 Many things have changed for Keegan Balle on the soccer field since his freshman year at Bradley. When he first arrived in 2010, the Braves soccer team was not expected to go to the NCAA tournament. He did not have the second most points on the team nor did he have the second most assists on the club.

Now, Balle is a junior and a leader on the pitch for the Braves. None of that would be possible without a childhood full of athletics. Soccer was not always Balle’s number one sport: baseball took that spot at first.

“Baseball was my number one sport until soccer,” Balle said. “Then I had to make a decision, and I chose soccer.”

While he mentioned soccer is not an easy sport to master, Balle acknowledged there was an aspect of baseball that he found to be more challenging than in soccer.

“Baseball is kind of difficult having to hit different types of pitches,” Balle said. “And with soccer you just have to do one thing – run around and connect on passes.”

Since Balle’s arrival, the soccer team has made it to two straight NCAA tournaments. In last year’s tournament, he took full advantage of the opportunity and scored the game clinching goal against Loyola, who they defeated 2-1.

“We had already played Loyola in the season last year,” Balle said. “We didn’t think it was going to be an easy game by any means, but we were pretty confident.”

As confident as the Braves may have been, they were trailing 1-0 at halftime.

“We were nervous at halftime,” Balle said. “But we knew something had to change. We came out strong; I think we had every shot in the second half. Bryan [Gaul] set up Jochen [Graf] for the goal that made it 1-1 and we kept pressing. Finally, Bryan got onto a ball and he got one-on-one with the goalie. The shot got blocked and it fell to me. I just had to put it away.”

Balle ranked the moment as his greatest individual accomplishment on the soccer field, but he was adamant that his greatest moment was with his team. It came in their Missouri Valley Conference Championship two years ago. He placed the MVC Championship above his 2009 season for Neuqua Valley High School, where he and his teammates stormed through an undefeated season that culminated a Regional Championship.

“Winning the MVC would definitely top that because college is a different level,” he said. “We [were] the underdogs in the tournament, and we came all the way back to win.”

With six games remaining in the regular season, Balle said the Braves knew they would not receive an at-large bid. The team understood that something needed to change.

“We got together one day after practice,” Balle said. “We said if we really want to make [it to the NCAA tournament] we’re going to have to start doing things differently and accept our roles and play for each other. Bobby Smith, our captain at the time, and Bryan Gaul took the reins and led us there.”

With those memories in the past, Balle and the Braves look towards this season, where they hope to accomplish something the soccer program has never done: make the NCAA tournament for a third consecutive year.

“To be honest, I think we can make it a third NCAA tournament in a row,” Balle said. “We are hosting the conference tournament and it’s always good to have the fans on your side.”

Expectations for the Braves soccer team have changed since Balle’s freshman year. Now, the hope is nothing changes, and expectations such as Balle’s remain the norm.