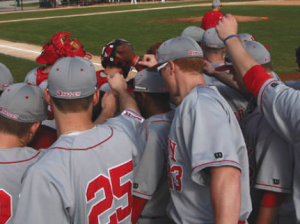 Senior Justin Ziegler, who recorded his first win of the season on March 16th, was pleased with the way his team played through those road games.

“It’s a promising start to the season,” he said. “I think we’ve shown a lot of people what we can do. The big thing for us is staying consistent.”

A lack of consistency has plagued the Braves at points throughout the season.

“At times we’re strong at all aspects of the game,“ Ziegler said. “Our hitting has been as good as I’ve seen it since I’ve been here.”

However, he said that being mentally ready on a consistent basis has been an issue early on.

Freshman Max Murphy said that only one poorly played inning that can ruin an entire game.

“Most of our losses were because of one big inning by the other team,” Murphy said. “They just came back to haunt us later in those games.”

Murphy, who is hitting .358 with four home runs and 12 runs batted in, said he simply wants to help his team to get better.

“Coming in here, I just wanted to help the team out and do my best to get us more wins,” he said. “I’m hoping I can help bring us a 30-win season.”

That type of optimism is shared by many of Murphy’s teammates. One of those teammates, sophomore Greg Partyka, said what he expects from his team.

“We’re a very competitive group of individuals, and I think we have the talent to beat anyone in the country,” he said.

Partyka, like Ziegler and Murphy, is aware of some problems he has had to start the season. While he is hitting .317 with 20 runs batted in, he said he is not completely satisfied with his performance.

“There are some at-bats I’d like to have back,” he said. “But overall, I think I’ve seen the ball pretty well and been hitting it pretty hard. I hit a couple balls over spring break that [went] right at the other team’s defense so hopefully those will start to fall. I’ve just got to keep hitting it hard.”

One thing becomes immediately apparent when talking to any of the Braves is the team comes first, regardless of personal performances.

If the Braves maintain that team-first attitude, a 30-win season seems perfectly within reach.

The Braves will play a weekend series on the road at SIU-Carbondale. They will return home next Wednesday to face Illinois.