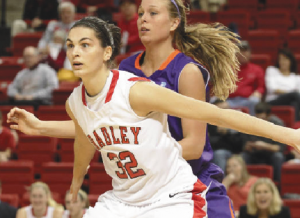 Although the Bradley women’s basketball team had its woes on the road, the Braves are on a four-game winning streak at home after beating Northern Iowa 75-61 last Friday.

In front of the second-largest home crowd this season, the Braves helped raise $3,200 for the Memorial Chapter of Komen for the Cure in the ninth annual Pink Zone game. With the win, Bradley improved to 14-12 and 5-9 in the Missouri Valley Conference.

“[The road losses were] a struggle but we came together as a team and we knew tonight that it meant a lot, not just to us, but to people with breast cancer,” freshman Shronda Butts said. “We had to put it all together and fight for them as well.”

“It’s awesome, especially that it’s for breast cancer and the Susan G. Komen Foundation and everything,” senior Leah Kassing said. “It’s just a great cause and I think we came out knowing that we wanted to help fight the fight against cancer and it gave us more motivation.”

Playing without the second-leading scorer, junior Katie Yohn, Bradley used a 47-point second half to pull away, in part to shooting better than 60 percent from the field.

“[Budd] was attacking the basket,” coach Paula Buscher said. “I thought that was a huge thing for us. We had to come off ball screens and really attack the basket, and I thought we did a very good job of that.”

After turning the ball over 27 times and losing to the Panthers by 14 on Jan. 20, the Braves held Northern Iowa to less than 40 percent shooting from the field and only committed 15 turnovers.

“I thought it went pretty well, we keyed into our game plan and we stopped them defensively,” Butts said. “It was a team effort all around.”

Bradley closes out its home schedule this weekend. The Braves will face Drake at 6 p.m. tonight in the arena, and Creighton at 2 p.m. Sunday.

“I think we did a much better job [than two weeks ago],” Buscher said. “There are always moments in a game as a coach that I don’t think they’re executing like they should, but I felt we did a really good job, we settled in and found the open players.”