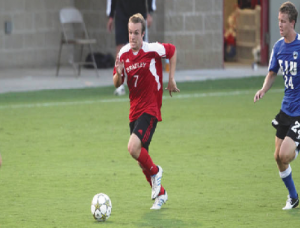 The Braves were without their leading scorer, senior forward Jochen Graf, who missed a second consecutive game with a quad injury. Bradley also lost junior forward Wojciech Wojcik in the first half with an ankle injury. The two have combined for 17 points this season.

“Since Jochen and Woj went out we haven’t been able to score a goal through running a play,” coach Jim DeRose said. “We’ve had to score on corner kicks and things like that. We’re going to have to see if we can get some guys healthy and hopefully that will help us in the attack. On the defensive side of ball, we keep making critical mistakes at difficult times.”

DeRose said Graf jogged for the first time since his injury on Wednesday and that Wojcik is currently in a boot.

“We’re in wait and see mode on both of those guys,” he said. “We’re just going to have to battle through it right now.”

With the loss to San Jose State, Bradley’s record fell to 4-3-2 on the year.

The Spartans struck first netting the only goal of the first half just 15 minutes into the game to take a 1-0 lead into halftime.

After the break, junior forward Scott Davis tied the game for the Braves, scoring his first goal of the season in the 48th minute. But San Jose State answered quickly with a goal in the 53rd and 58th minute to take a commanding 3-1 lead.

Junior Keegan Balle ended the scoring when he connected on a penalty kick in the 74th minute to draw Bradley within one goal, but the Braves only managed two more shots the rest of the way.

It was Balle’s fifth goal of the season and his fourth penalty kick in the last five games.

After a five game road swing where Bradley went 2-2-1, the Braves return home with two of its toughest games of the season looming against nationally ranked Northwestern and Missouri State.

“The first thing is going to start with us,” DeRose said. “We got to be healthy. We got to have the best players we can have healthy and ready to go. But at the same token the next game for us we want to get a good result.”