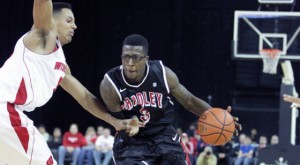 The Braves lost 70-66 to Wofford Nov. 22 at Carver Arena then proceeded to lose two games on consecutive nights to No. 11 Wisconsin and Nevada in Hoffman Estates near Chicago last weekend.

Coach Geno Ford said the team will learn from the losses and grow as the season progresses.

“There’s always work to be done,” Ford said. “It’s a process. The big keys for us is taking what we didn’t do well and building on it.”

Junior Jake Eastman said the team needs him to shoot well from the three-point line to space the floor and open up driving lanes.

“[We] talked about it all offseason, all preseason I’ve got to hit open shots for this team to be successful,” Eastman said.

The Braves have also struggled all season making free throws. The team is shooting just 62 percent from the charity stripe in its first six games.

“My philosophy on free throw shooting is you work on it in practice,” Ford said. “When you get to the game you can’t be a head case, you just got to step up and go with your routine,” Ford said. “I don’t think guys shoot well if they’re on the foul line thinking elbow here, finger here. You can’t get mechanical.”

The bright spot for Bradley came from Taylor Brown. The senior forward scored 18 points against both Wisconsin and Nevada. For his performance, Brown was named to the Chicago Invitational all-tournament team.

He is averaging 18 points and eight rebounds this season.

Ford said the team needs to focus on improving and that it is a long season.

“We have a long way to go,” he said. “We’re in the marathon at this point. Guys just have to keep believing we’re going to get better and better and better. The key is guys being eager to learn.”

The Braves next game is tomorrow night on the road at Wyoming in the Mountain West-Missouri Valley Challenge. Bradley will return home Tuesday to face Northeastern at Carver Arena.