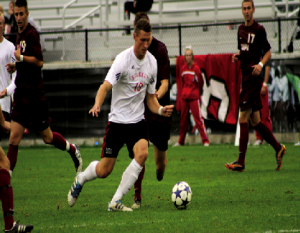 The Bradley soccer team snapped its five-game unbeaten streak in a 1-0 loss to Belmont in the championship game of the Mafiaoza’s Invitational Sunday afternoon.

With the loss, the Braves record dropped to 4-2-2 on the season.

The game was scoreless until Belmont’s Nico Olsak netted a penalty kick in the 69th minute to give the Bruins all the offense they would need.

Bradley managed to get three corner kicks in the 79th and 80th minutes, but was not able to get a shot off.

Entering the game the Braves led the Missouri Valley Conference in scoring and shots, but the team managed only four shots and was shutout for the first time all season.

“We didn’t generate a tremendous amount of attack,” coach Jim DeRose said. “We found a way to get the win on Friday [against Lipscomb], which is good. Sunday we just didn’t generate enough chances to give us a fighting opportunity.”

The Braves offensive struggles against Belmont may have been due in part to the loss of leading scorer senior Jochen Graf, who injured his quad Friday in the 2-1 win over Lipscomb.

“We have to give it five to seven days to see how it reacts,” he said. “We’ll see if it gets better and by the end of the week we should know if it’s something long-term or not. Jochen is the catalyst for us not just in scoring goals but creating them. If he’s out for awhile that’s going to have to be something we’ll have to fight through.”

DeRose said the team is better for the experience of playing Belmont. The Bruins feature a senior-laden team that played the Braves with a lot of intensity.

“I think that was a good lesson for us because I think Belmont was playing Bradley like they were a back-to-back tournament team,” he said. “They really came with a great fighting spirit. And I thought our guys responded to it but we weren’t able to impose ourselves on them.”

It is nearly the halfway point of the season and conference play is just a couple weeks away. DeRose said the team has a couple of key things they need to focus on.

“We’re defending overall pretty well,” he said. “The problem is it’s one or two lapses in a game that have cost us those losses.”

The Braves travel to California to face San Jose State tonight before returning home on Sep. 29 to face Northern Kentucky.