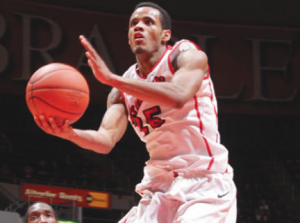 Sophomore Walt Lemon Jr. was fouled with 3.1 seconds remaining and connected on the first free throw but missed the second as Illinois State escaped Carver Arena with a 54-53 win Saturday afternoon.

The Braves finished their regular season 7-24 overall and 2-16 in Missouri Valley Conference play.

“It’s a tough one,” coach Geno Ford said. “It’s even a tough one to talk to the guys about because in reality it was a huge step forward. I thought we really battled. We gave ourselves a ton of opportunities.”

Lemon scored a game-high 21 points off of the bench and shot 7-for-13 from the field.

“I thought Walt was fantastic,” Ford said. “In a lot of ways, he was the best player on the floor. I know he’s disappointed that the free throw didn’t go in but I’d say Walt’s been our best player almost all season. He’s the guy we want to have it. We believe in him and he’s going to do nothing but continue to get better.”

Lemon said he will use the missed free throw as motivation to get better.

“That’s where I want to be at the end of the game,” he said. “I wish the shot would have went down but it didn’t. Like coach said, I got to stay in the gym and keep shooting them because next time I guarantee you I make them.”

It was the last game at Carver Arena in the careers of seniors Taylor Brown, Charonn Woods and Anthony Thompson, though Brown missed the game with an injury.

Bradley struggled from the field as they have all season, shooting just over 30 percent for the game.

But the Braves didn’t let its shooting struggles affect its game on the other end of the floor. The team played great defense down the stretch and held Illinois State to just 35 percent from the field.

Junior Dyricus Simms-Edwards was the only other Bradley player in double-figures finishing with 14 points.

The Braves played Drake last night in the opening round of the MVC tournament in St. Louis. With a win, they will face Creighton at 6:05 p.m. tonight.