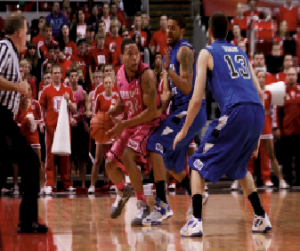 The men’s basketball team forced the Creighton Blue Jays into a sluggish first half on Feb. 2, before the Blue Jays used a 48-point second half to roll past Braves on their way to a 75-48 victory.

It was déjà vu Wednesday evening, as Bradley forced Creighton into 12 turnovers in the first half before the Blue Jays used another 48-point second half to outpace the Braves 80-62.

“They killed us on the offensive glass,” coach Geno Ford said. “We just weren’t sharp; we really weren’t sharp. Guys wanted to play, and I don’t know if we had the emotion of the day get to us a little bit, but we certainly haven’t played that poorly at home all year so it’s disappointing on a lot of levels.”

Bradley was outrebounded 41-20 in the game, and outscored 14-3 on second chance points due to Creighton’s 13 offensive rebounds.

In a ceremony before their final home game, Bradley honored its four seniors: Jake Eastman, Will Egolf, Milos Knezevic and Dyricus Simms-Edwards. Simms-Edwards made two steals in the game, tying the program’s single-season record of 83.

“I feel bad for the seniors more than I’m angry at our team,” Ford said. “It’s late in the year, and we put a clunker against a team that’s been ranked in the top-15. That’s a bad combination.”

Bradley will travel to Missouri State for its final game of the regular season at 7:05 Saturday.

After the loss, the Braves can’t reach a seed higher than seventh in the Missouri Valley Conference Tournament in St. Louis, and will play Thursday in the play-in round for the third consecutive year. Bradley hasn’t won the conference tournament since 1988.

“I mean you want to win so bad, but at the same time we have more games to play,” Simms-Edwards said. “We’re not going to get too down.”