Braves get non-conference win over NIU: Baseball scores in double-digits and notches 11-5 victory 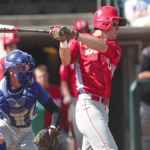 The Bradley baseball team finally got back in the win column with a 11-5 victory over Northern Illinois Tuesday.

The Braves now sit at 15-25 on the season with only four wins in their last 15 games.

Bradley jumped on the visiting Huskies early and never looked back. They scored five runs in the first inning then added one in the third and four more in the fourth.

The offense has been consistenly good for the Braves all season, but it has been the pitching that has led to trouble all year long.

A good start from Nasshan was exactly what the team needed.

“It hasn’t been because we’ve been beat, it’s basically because we beat ourselves [when] we don’t throw strikes on the mound, we put too many guys on and we’re giving away those opportunities and free runners,” coach Elvis Dominguez said. “Our guys are still battling and they come to the ballpark prepared, but it’s just we have to get our pitching staff in line to go with our offense.”

Centerfielder Max Murphy went 2-for-3 with two runs scored and an RBI. Shortstop Tyler Leffler went 2-for-4 with an RBI.

It was a record setting day for leftfielder Mike Tauchman who drew three walks to set the Bradley school-record for reaching base safely. The senior has 222 hits, 103 walks and 18 hit by pitches in his career. Tauchman passed Bradley Athletics Hall-of-Famer Nelson Correa who previously held the record by reaching base 340 times.

Tauchman leads the Braves in both batting average (.416) and runs produced (73).

Bradley returns to action tonight at 6 p.m. when they face MacMurray at Peoria Chiefs Stadium. The Braves will then continue their home stand when they play Eureka at 6 p.m. on Tuesday.