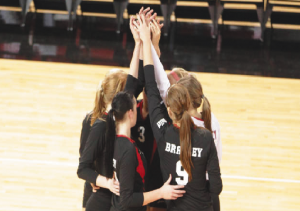 It was a tale of two matches this weekend for the Bradley volleyball team. Friday, the Braves lost in three sets to Illinois State, but they bounced back Saturday to sweep Indiana State and keep their postseason hopes alive.

In their loss to Redbirds, the Braves committed 30 errors, which converted to a 0.3 attack percentage. Those numbers included a first set that was a season-worst for the team with 15 errors to only seven kills. However, the next night Bradley rebounded to commit only seven errors, which tied a season-low.

In Saturday’s win against the last place Sycamores, junior Amy Angelos led the Braves with nine kills and sophomore Courtney Keefe nearly earned a double-double with eight kills and 14 digs. Freshman Jessica Teel set a new career-high with 31 assists as the team’s setter.

“[Teel] did a terrific job,” Maurer said. “We obviously know size wise that it can be a factor if we let it be a factor but we have great defense back there as well. And that wasn’t an issue at all. She’s always been an offensive-minded setter despite her stature.”

Bradley is ninth in the Missouri Valley Conference with a 2-9 record, while only the top six teams in the conference make the postseason MVC Tournament. Currently, Missouri State is in sixth place with a 5-6 record.

Thus, the Braves head into an important road swing against Missouri State Friday at 7 p.m. and Wichita State on Saturday.

“I think we’ve felt that all along and that pressure has mounted so much whereas now we can’t let that get to us. I mean they are absolutely must win [games] at this point, because we started off the first half [of the conference season] 1-9, if you want to have any shot [at the MVC Tournament].”

Although the team has talked about their goal of making the MVC Tournament after falling one win shy of their first postseason match since 2005, coach Maurer said that’s not how they will define their year.

“We aren’t going to judge our season whether or not we make the tournament as a success or failure,” she said. “What we want to do is get as close as we can possibly can and try to put ourselves in the driver’s seat to be in that position, but we want to take some pressure off and just say play.”