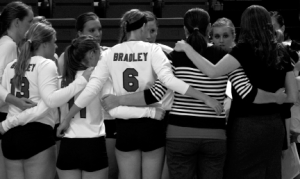 After winning the first set, the volleyball team dropped three straight sets to fall to its I-74 rival Illinois State Sunday afternoon.

“It was all on us,” said junior defensive specialisr Allie Gardner. “We beat ourselves. We started off fairly confident, and we kind of lost it after [the first set].”

“We are going to improve our mental game, and being able to finish and executing at crucial points in the game.” Gardner said.

Dejean has 1,212 digs in her career, fourth in Bradley history, and is 149 digs from becoming the school’s all-time leader.

Bradley had a .188 attack percentage in the first set, but averaged a .058 for the rest of the match.

The Redbirds own a 54-13 edge over Bradley in the history of the rivalry, including a nine-match losing streak for the Braves in Normal.

Last Friday, Bradley was one set away from its second conference victory before losing the fourth and fifth set.

“We lost our momentum and lost our edge,” Gardner said, “but I’m looking forward to a recovery this weekend.”

Tupuritis led the team with her third double-double of the season featuring 15 kills and 18 digs. Senior Annie Cave and junior Madelyn Ervin followed Tupuritis with 12 and 11 kills, respectively. Dejean topped the Braves with a season-high 24 digs.

Bradley averaged a .239 attack percentage in first three sets, before declining to .036 in the final two.

Bradley returns to action tonight against Missouri State at 7 p.m. in the arena. The Bears advanced to the NCAA Tournament last season and are 10-4 this year with a 3-0 record in conference play.