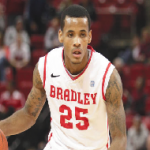 The Bradley men’s basketball team’s season officially came to an end in the quarterfinals of the CollegeInsider.com Tournament Tuesday night.

The Braves lost on the road to Missouri Valley Conference foe Northern Iowa for the third time this season 90-77.

BU finishes the season 18-17 record, which is 11 wins better than the seven the team posted last year.

“We played really well in the first half,” coach Geno Ford said. “We had a slow start to the second half for about five minutes and then just couldn’t really get back over the hump. I thought the guys really battled and we did a lot of good things. But when you’re on the road you have to play well for 40 minutes.”

The Braves made uncharacteristically made seven first half threes and the game was locked in a 40-40 tie at halftime. Then UNI used a quick 8-2 run out of the break and never looked back.

The Panthers made 7-for-11 from three and shot 63 percent from the field in the second half.

Junior Walt Lemon Jr. scored a team-high 19 points along with seven rebounds and six assists. In their final game as Braves, senior Will Egolf scored 17 points while senior Dyricus Simms-Edwards chipped in 11.

Bradley reached the quarterfinals of the CIT by winning two home games at the Arena over Green Bay and Tulane.

Ford said playing in the postseason was a huge step for this program and that it paid dividends for the team. It was the Braves first postseason appearance since the 2008-09 season.

“The younger guys got a chance to get extra practice time which is really valuable,” he said. “I also think that our older guys…we got a chance to spend some more time with them. So just to get a chance to be around those guys [the seniors] for another few weeks was special for the coaches and the players.”

Ford said the year as a whole was a major success and that the hard work of the players is starting to turnaround the program.

“If you look at the big picture it was a really, really successful year,” Ford said. “We were like the fifth biggest turnaround in the country. We went from seven wins to 18. We played in a postseason tournament. We did a lot of really good things. I couldn’t feel any better about what the seniors did. It was a successful year on a lot of fronts.”