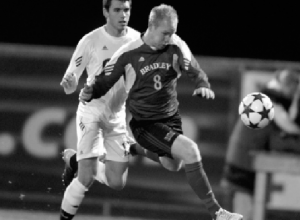 The Bradley soccer team completed its third straight winning season with a record of 10-6-4. Unfortunately, this did not coincide with a trip to the NCAA Tournament.

“We do have to look at the positives,” coach Jim DeRose said. “With the injuries and the young kids and losing so many seniors from last year [we still had] our third straight season with double digit wins.”

“It says we’re putting ourselves in a position to win,” DeRose said. “So we’re excited about that.”

But being in a position to win is not enough if the team cannot capitalize on the situation.

“Looking back obviously you’d like to play in the NCAA tournament,” DeRose said.

That is not to say the season was without high points. Bradley defeated Northwestern, a team that was ranked No. 17 at the time.

Yet fans of the Braves were left wanting more, and injuries played a part in the unexpected way the season ended. Jochen Graf and Wojciech Wojcik both missed games due to injuries.

“I’d say the most disappointing moment of the year were the injuries sustained to Jochen,” DeRose said. “It really wiped out what could have been an All-American senior campaign. Jochen missed almost nine or ten games, and that’s the hardest thing because Jochen is so passionate when we lost him, we lost that energy. We lost that leader emotionally. We lost that go to guy in the clutch.”

The season would not have been different simply based on Wojcik’s and Graf’s production. Rather, the Braves record may be different because of the unique leadership abilities of Graf.

“Jochen was kind of a leader on three different levels,” DeRose said. “He is a very positive guy, has a great work ethic, and in big games is such a clutch player. When you lose those three things you generally are not going to replace that with one person.”

Knowing this, the team discussed a concept they called ‘shared leadership’.

“With so many seniors,” DeRose said. “We talked about this shared leadership. No one within the team was going to go out and get you ten goals like Jochen had the ability to, so you [have] to share a little bit.”

With injuries comes additional playing time for less experienced players, and that will hold back any team from reaching its full potential. DeRose is hopeful that next year, the team will stay healthier, and fight for a shot at postseason soccer.

“We’ve got a big senior class next year,” DeRose said. “Hopefully a year of experience and having more depth next year will help.”