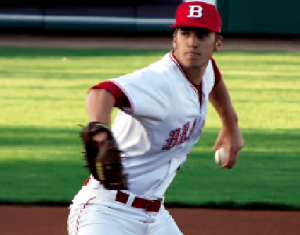 The Bradley Braves baseball team has righted the ship with a three-game winning streak dating back to last weekend. Since March 31, they have scored 28 runs, the most of any three-game stretch this season.

Junior outfielder Mike Tauchman continues to produce since returning to the lineup from a hamstring injury. Highlighted by a three RBI game against Western Illinois on April 1, Tauchman feels great about the way he has added to the team’s victories.

“It was awesome,” he said. “I was in the right place at the right time. My job at the top of the order is to do whatever is needed from the team whether that be move runners over, bunt, hit a sacrifice fly, or in this case get a big hit.”

Tauchman, who was named to the 2011 All-Missouri Valley Conference 2nd-team, led the Braves in batting average, on-base percentage and runs batted in last season. Spending time out of the lineup did not come easy.

“It’s been tough dealing with the hamstring injury,” Tauchman said. “It’s nice to get back in the lineup with the guys and be out there everyday.”

The Braves have also enjoyed Tauchman’s return to the lineup as he has amassed two runs, five hits, and four RBI’s in his last four games.

“My swing’s really starting to feel good,” Tauchman said. “I just hope I can continue to make improvements and get into a good rhythm.”

While a good rhythm is exactly where the Braves find themselves, Tauchman knows the Braves could sport a better record than 14-11-1.

“Our record is a little bit misleading because a lot of the games we have played in, we’ve beaten ourselves,” Tauchman said. “I think our best baseball is still ahead of us and our record’s only going to get better.”

Thankfully for the Braves, in Tauchman’s return he has not missed a beat. Named Bradley’s Country Financial Scholar-Athlete of the week in early March, his return has coincided with victories for the Braves.

Not just any victories, however. As Tauchman said they’ve been collecting team wins.

“It’s really good that all the guys on the team are contributing. Especially these last few wins, they’ve been a true definition of a team win. Everyone out there is contributing. Those are the ones that make the game fun. I think that’s going to continue all year.”