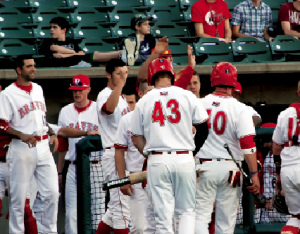 While the Bradley baseball team ended last week on a high note, a four-game losing streak preceding a victory marked some of the inconsistencies the team has dealt with all season long.

“I’d say a big thing is consistency,” said junior relief pitcher Patrick Flanagan. “We’ll have games were we’ll go out and look like a [Missouri Valley Conference] contender, and other times we’ll go out and struggle all the way around. I think if we can have some consistency from game to game then we’ll be a lot better off.”

Flanagan, who missed nearly all of last season with an injury, has pitched 17 innings with a  3.18 ERA on the season.

“It’s a great feeling,” said Flanagan. “Last year was the first time I’d been injured. It was a tough experience, and coming back from the injury was harder than I thought it would be.”

Coach Elvis Dominguez said he knows that Flanagan is important to his team.

“Last year he pitched the first weekend for us and never pitched again,” he said. “This year he’s healthy. He’s definitely a vital part of our pitching staff.”

Dominguez, whose Braves are 11-9 on the season, also noticed the inconsistent play of his team. However, he does not believe the players have performed poorly overall.

Another issue is things just do not seem to be breaking the Braves way.

“We haven’t beaten ourselves as far as making errors or anything like that,” Dominguez said. “Anytime we hit a ball, we hit it at somebody. Anytime we make a pitch, it happens to go for extra bases.”

Dominguez took to a similar defense of Joe Bircher, the ace of the Braves pitching rotation.

“It was three pitches,” he said. “You take those three pitches away and he wins 5-0. They could have hit them on the ground, or hit them in the air, but they happened to hit them over the fence.”

Unfortunately, those breaks are simply a part of the game, although that does not mean Bircher took the loss any easier.

“I think he felt worse than anybody in the club that he wasn’t able to come through after having a three run lead,” Dominguez said.

It was immediately apparent that Bircher was not pleased with his performance last week.

“I’m not really ecstatic about it but I gave us a chance to win,” he said. “Sometimes things just aren’t going to go your way. Three home runs…there’s no defense for that.”

Even with the loss against Southern Illinois Bircher is playing well sporting a 3-1 record with an ERA of 3.40. Bircher admits it can be infuriating at times when seemingly small occurences within the game decide the outcome of a well-played game.

“It can definitely get frustrating,” he said. “Bottom line is it’s a team game. If you don’t show frustration and just stick to it, good things are going to happen.”

Bircher believes the Braves are better than their win-loss totals. If the breaks start falling their way, perhaps the record will begin to represent the talent in the clubhouse.

“I think we’ve been playing a lot better than the record indicates. I think that we’re [starting to realize] we can beat any team we play. We’re really going to have a quality season from here on out.”