Braves take of 2 of 3 from MSU 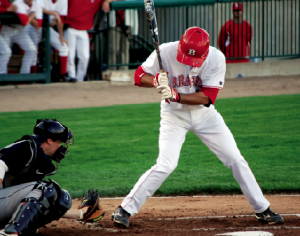 After taking two of three from Missouri State this weekend and winning six of their last seven, the Braves baseball team is playing its best baseball of the season.

Senior Joe Bircher pitched all nine innings in a twelve-strikeout effort Friday night, and junior Mike Tauchman was the hero Sunday afternoon in a 4-3 win as he collected the game winning RBI in the eighth inning.

Tauchman, who has been playing well since his return from injury, said the team wasn’t ready for the game Saturday and it showed in a 12-2 loss.

“Saturday’s loss was pretty tough,” he said. “As a team we didn’t come prepared to play.”

After the gem by Bircher on Friday night and the dismal affair on Saturday, Tauchman and his teammates placed much importance, as they often do, on their Sunday matchup.

“We placed a lot of importance on Sunday,” Tauchman said. “We have a saying on our team that ‘heart wins on Sundays’. It’s kind of a joke, but it’s taken seriously.”

It showed on Sunday when Tauchman drove in junior Andrew Wasmund on a single to left field to take the lead in the bottom of the eighth inning.

“It was very exciting, a huge game for us to win,” said Tauchman. “I’ve said all year to be a successful team in the Missouri Valley, every single person needs to be committed to the team. I thought that on Sunday, as a team, we executed almost to perfection.”

At 16-12, the Braves still have a ways to go to catch the team they took two of three games from over the weekend. Missouri State is in second place in the MVC at 24-10 and Tauchman felt winning the series gave a boost to his teammates.

“It was a huge confidence booster,” he said. “They [Missouri State] were the top ranked team in the preseason.”

The Braves are doing something all great teams most do, believe in themselves.

“We’ve believed all year that we belong and we can make some waves in the conference this year,” Tauchman said.

For the Braves, a climb to the top of the MVC standings begins with the belief in themselves. Tauchman said the Braves are here to contend in the MVC.

“The time for rebuilding and the time for growing is over,” Tauchman said. “It’s time for our team to come together and make a serious run.”