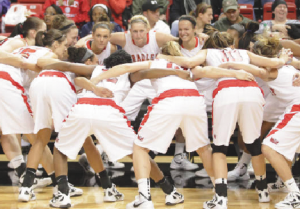 If the Bradley women’s basketball team took a step forward with back-to-back home wins two weeks ago, then it took a step backwards with two road losses last weekend.

The Braves are on a six-game losing streak on the road, and have lost 14 consecutive times to Illinois State after dropping an 82-63 contest Sunday.

“The final score was not indicative of what the game was,” coach Paula Buscher said.  “There were several times late in the second half when it was a four-point ballgame on a team that is tied right now for first place in the conference and also has a 23-game home [Missouri] Valley [Conference] winning streak. I feel like we were right there, we just had a lack of execution.”

Bradley trailed 59-55 with seven minutes left before the Redbirds used a 21-6 run to win the game. Senior Leah Kassing led the Braves with 17 points, while senior Mackenzie Westcott closely followed with 13. Westcott grabbed 11 rebounds to complete her sixth double-double this season.

“I think [Westcott is] playing with that sense of urgency that you want all your seniors to play with, and you need to be playing with at this time of the year,” Buscher said. “She’s really stepped it up, and she’s looking for her scoring options more and looking to attack the basket more, which is always a positive.”

With the loss, Bradley falls to a 13-12 record this season and 4-9 in conference play. The Braves sit in eighth place in the Missouri Valley and two games behind seventh.

“It’s all about placement in the tournament,” Buscher said. “But for us, I think it’s continuing what we talked about in the second half of the season, and especially trying to get clicking on all cylinders as we wind down the regular season.”

Last Friday, Bradley lost 77-60 to Indiana State. Bradley led 29-27 at halftime, but a 55 percent shooting percentage by the Sycamores in the second half cost the Braves down the stretch.

Sophomore Catie O’Leary topped the Braves with 17 points, followed by Westcott with 11.

Bradley has three consecutive home games starting tonight against Northern Iowa at 6 p.m. in the arena. Tonight’s game is the ninth annual Pink Zone game with proceeds helping benefit Komen for the Cure. Fans are encouraged to wear pink and the first 500 fans will receive free pink Bradley t-shirts.

“We just have to get over that hump and hit our stride,” Buscher said. “The only way we are going to do that is if we focus on the execution part of our game.”