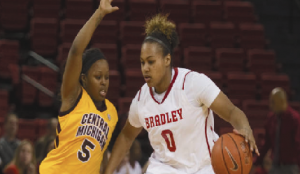 After a season-long five-game road swing, which included a win against the University of Illinois, the Bradley women’s basketball team returned to Peoria to beat Northern Illinois 67-58 Wednesday.

The Braves defeated the Fighting Illini 83-77 on Nov. 15, as Bradley never trailed in the game and were led by five players scoring in double-digits, including a double-double effort by junior Catie O’Leary with 15 points and 12 rebounds.

“I think [the win] showed how well we can play together as a team,” O’Leary said. “We had a lot of people step up, we’re starting to have a lot of scorers in double digits and stuff like that, which is what we need. It definitely put our road swing in the right direction.”

“We are still in that building phase, and it’s great for us because we had a nice beginning to the season where we got some great competition,” coach Michael Brooks said. “But we’ve also exposed ourselves in a lot of ways, and now we get some time to be able to really solidify and rectify some issues that we have so then going into that conference time we’re already going to be tested already.”

O’Leary earned all-tournament honors at the Northern Arizona Thanksgiving Classic, after the Braves lost to Tulane but beat Northern Arizona, after averaging 15.5 points and nine rebounds per game.

“Catie has just been such a steady performer for us,” Brooks said. “What she does scoring wise and rebounding for us, and she usually plays on one of the top offensive [opposing] players, her leadership and the qualities she brings are the centerpiece for what we’re trying to do.”

Bradley faces Winthrop at 7 p.m. Saturday in the arena and heads to Wisconsin-Milwaukee for a game at 7 p.m. Tuesday before a two-week stretch of no games due to final exams.