Braves up record, despite slow starts 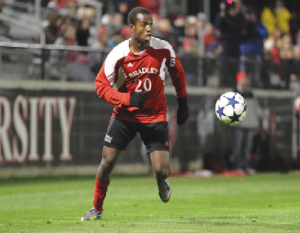 The Bradley soccer team continued to show it’s youth, winning a game and tying in another last weekend during the Hotels at Grand Prairie Classic at Shea Stadium.

On Friday night, the Braves played Hartwick to a 1-1 tie. Neither team scored until the 81st minute when the Hawks’ Tim Crawford sent a shot off Bradley keeper Brian Billings’ hands that skipped into the goal.

It took less than a minute for sophomore forward Desmond Campbell to answer Hartwick’s goal with one of his own on an assist from senior Jochen Graf to secure the tie.

Bradley soccer coach Jim DeRose said Campbell’s return to the lineup after missing the first two games due to injury is huge for the Braves.

“Without Desmond, we lacked another goal scorer,” he said. “If you saw the game his composure in the box is something we desperately need, and hopefully that pays dividends the rest of the way.”

The Braves started off Sunday’s game against Nebraska-Omaha immediately down a goal. UNO grabbed the early lead with a score in the seventh minute.

As they did Friday night, Bradley answered quickly. It was Campbell once again with a goal in the 13th minute to tie the game 1-1.

UNO added another score to make it a 2-1 game at halftime. The Braves turned up the offensive pressure in the second half outshooting the Mavericks 18-5. Junior Keegan Balle and Campbell each scored after halftime giving Bradley the 3-2 win.

The Braves improved their record to 2-1-1 on the season.

“We have a younger team that is starting to come together and show a little resiliency,” DeRose said. “That’s a plus. The minus is we’ve given up the first goal in our last three games. When you do that you pretty much get what you get; a win, a loss and a tie. You’re not going to get a lot of wins if you do too much of that.”

DeRose said with the youth of the team there is going to continue to be an adjustment period for the new guys.

“We’re going to have to keep evolving because everything that happens for these guys is new,” he said. “As a coach, when you go in and show these guys film it is new to a third of the roster. It’s a different dynamic.”

Bradley returns to the pitch tonight in the Evansville Aces ProRehab Classic against Cincinnati. On Sunday, the Braves will square off against Portland.