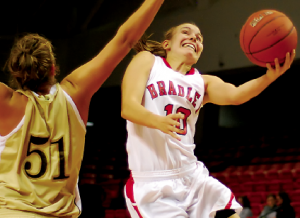 For the first time since the middle of December, the Bradley women’s basketball team put together back-to-back wins. The Braves beat Southern Illinois and Evansville, pushing their record to 13-10 and 4-7 in conference play.

Last Saturday, Bradley beat the Salukis 66-50 despite sluggish offensive performances by both teams. The Braves shot a little over 30 percent from the field and held the Salukis to 2-for-17 shooting behind the 3-point arc.

“We had good looks and we had nice shots,” coach Paula Buscher said. “But at the same time, I don’t think it impacted us defensively. For the most part, I thought we stepped up and stayed solid defensively.”

Bradley, as a team, picked up 55 rebounds, the highest amount since tallying 58 on Dec. 29, 2001, and outrebounded Southern Illinois by 22. Seniors Mackenzie Westcott, Leah Kassing and sophomore Catie O’Leary all ended up with more than 10 boards.

“They were good shots,” Buscher said. “They were open shots. We didn’t knock them down but I loved how we crashed the boards.”

Bradley swept the Salukis in the season-series, while Westcott recorded her fifth double-double of the season with a team-high 15 points, and Kassing earned her 10th double-double with 13. Senior Hanna Muegge provided a spark off the bench with 11 points and shot a perfect 4-for-4  from the field.

“We’re excited about [the win] and this is what we expected to do in the first round [of Missouri Valley play during the season],” Westcott said. “Obviously, we weren’t happy how the first round went and we’re changing it now.”

“We’ve been talking the whole time about the second round just to keep our focus on the nine games left,” Buscher said. “We’re 2-0 right now, and it’s really a matter of maintaining our focus.”

In the win against the Purple Aces, O’Leary added 17 points, and Westcott grabbed 15 rebounds. Junior guard Brooke Bisping tied a season-high with eight points, in part to shooting 6-for-6 from the free-throw line.

The Braves head on the road to face Indiana State at 6 p.m. tonight and lllinois State Sunday at 2 p.m. Bradley lost to both teams at home earlier in the season, including a two-point loss to Interstate-74 rival, the Redbirds.