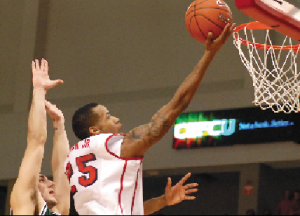 The Bradley men’s basketball team finished the preseason portion of its schedule with an 81-71 victory over the College of Wooster Tuesday night at Carver Arena.

“I thought we had a lot of good possessions late,” coach Geno Ford said. “I thought our running wore them down a little bit in the second half, which needs to happen with that. Their legs got away from them down the stretch.”

Ford said he thought the team was a lot better than they were in the first exhibition game.

“Are we where we need to be? Absolutely not,” he said. “There’s always work to be done. It’s a process. The big key for us is taking what we didn’t do well tonight and building on it for Sunday because now the preseason is over and they all count for real.”

For the second consecutive game, senior Taylor Brown was the game-high scorer with 21 points. He scored a total of 46 points in the two exhibition games.

The Braves shot 50 percent from the field, but struggled from the free throw line, going 19-for-31.

Bradley was without starting sophomore center Jordan Prosser, who was out after getting his wisdom teeth removed. Prosser is expected to play in the season opener Sunday.

“It’s always hard to play without a guy,” Ford said. “Then tonight we’re playing without a post guy who is a big part of what we’re doing. I thought in the first half we didn’t necessarily get the response we needed in the post. It was a little better in the second half, especially on the offensive end.”

The Braves were outrebounded 39-33 in Prosser’s absence.

Simms-Edwards sparked Bradley’s offense for most of the evening, scoring 19 points. He had the highlight of the night with a one-handed baseline slam in the second half.

“I feel like as a team we’re getting better,” Simms-Edwards said. “We’re getting more cohesive and we’re all gelling out there.”

The Braves forced Wooster into 20 turnovers and converted that into 20 points. They also finished with 19-9 advantage in transition points.

Lemon had 17 points and seven boards in the victory.

“I was feeling comfortable,” Lemon said. “I think this game I played a lot better. I played with a lot more confidence, leading the team like coach has been preaching to me.”

Bradley begins the regular season at 4 p.m. Sunday in Carver Arena against the University of Missouri-Kansas City.