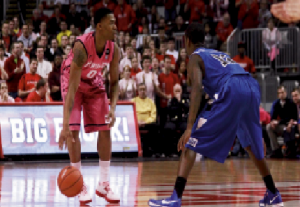 After carrying the men’s basketball team for a majority of the season, senior Dyricus Simms-Edwards was limited with a back injury in last Saturday’s game against the Indiana State Sycamores.

Before the game Simms-Edwards had so much pain, he was struggling to bend down long enough to tie his shoes. In the game, junior Tyshon Pickett went down briefly with a knee injury and junior Walt Lemon Jr. was hampered by foul trouble.

Coach Geno Ford admitted that he was nervous about not having a proven point guard to lead the team.

“I’d love to give you a coach speak response that would be articulate and beautiful, but to be quite frank, I was a little nervous,” Ford said. “I was nervous at halftime because I didn’t know how [Dyricus’] back would respond to having to kind of stiffen up.”

Enter freshman Ka’Darryl Bell, who swooped in with a career-high 10 points and a team-high four steals to help carry Bradley to an 80-68 victory.

“I don’t like looking over and seeing Walt sitting one chair over from me,” Ford said. “I don’t need another assistant. So we need Walt in the game … but Ka’Darryl stepped up and filled a void in a major way and he delivered.”

Lemon and Pickett led the Braves with a team-leading 17 points each. Simms-Edwards was able to score 13 points and grab four steals in 28 minutes. The game was also Bradley’s inaugural “Go Pink, Go Bradley” game, as the team donned pink uniforms to pay tribute to breast cancer survivors.

The Braves suffered a heart-breaking 92-84 overtime loss to Drake Wednesday. Senior Will Egolf hit a 3-pointer to score a career-high 21 points with 28 seconds left in regulation to give Bradley a five-point lead. The Bulldogs’ junior Richard Carter scored three points on a layup and a foul eight seconds later. Next, Tyshon Pickett missed the front-end of a one and bonus free throw situation.

Drake then missed two 3-pointers in a row before junior Seth VanDeest picked up an offensive rebound and drew a foul with 1.2 seconds remaining. Down two, VanDeest sunk the two free throws to put the game into overtime, where the Bulldogs were able to sink 14 free throws in the extra period to beat the Braves.

“People aren’t winning on the road very often, and we’ve got to find a way to get one of these last two road games to make up for that home loss [to Northern Iowa],” Ford said.

Bradley will head to Illinois-Chicago in the BracketBusters game at 7 p.m. Saturday before returning for its final home game of the season against Creighton at 7 p.m. Wednesday.