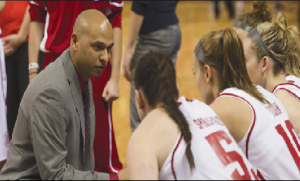 With just under four minutes to play, the Bradley women’s basketball team trailed Eastern Illinois by five points and going winless in the first two games of the season.

However, freshman Jenny Smith and junior Kelsey Budd combined for nine points down the stretch, while Smith sunk two free throws with 1.6 seconds remaining in the game to give the Braves a 66-65 victory.

“It was a great win,” coach Michael Brooks said. “It’s always nice to go on the road to get a win, and you know we would have liked to win that first one at home, but at that same time it’s a great confidence builder for our team as we have four more road games in a row.”

Down one point with seven seconds left, sophomore guard Shronda Butts drove past her defender into the lane and passed it to Smith across the paint, who was fouled on her layup attempt. After making the first free throw, the Panthers called a time out, but it didn’t deter Smith who made the game-winning free throw afterwards.

“That play was drawn up for any option possible,” Smith said. “I think we were trying to get it to [senior] Katie Yohn, but if you had a chance to score, then you were supposed to score. Shronda took that chance, made a beautiful pass, and I just happened to be under the basket.”

Smith scored six of her eight points in the final four minutes of the game, including four of them at the free-throw line after she missed her first two free throw attempts earlier in the second half.

“I was a little rattled [from missing the earlier free throws], but I thought that my team needs this and I need to do this right now,” Smith said.

The Braves lost their season-opener against Central Michigan 73-58. O’Leary led the team with 17 points, followed by Yohn, who added 13 points and 14 rebounds for her first-career double-double.

“Eastern [Illinois] was picked second in their league, so they were a good test,” Brooks said. “And Central [Michigan] was second in their league as well so we’ve gone up against some stiff competition to start the year, and we’ve got to continue to get better and compete against ourselves.”

Bradley continues its five-game road swing by traveling to play South Florida at 4 p.m. Tuesday, and in the Northern Arizona Thanksgiving Classic next weekend starting at 5 p.m. Friday against Tulane.