Gaul takes his talents to LA 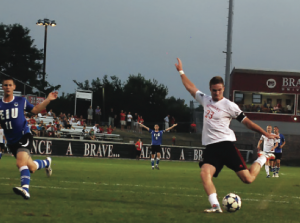 When Bryan Gaul was six years old, he told his mom that he wanted to be a professional soccer player.

The 2011 MLS Cup Champion Los Angeles Galaxy used their first round pick to select the 6-foot-5 standout from Bradley.

“It was a roller coaster of emotions,” Gaul said. “I woke up really early the day of the draft. They only had it on the Internet so you had to watch it on the little draft tracker…and watch your name pop up.”

Right before the draft was set to begin, an assistant coach from the Galaxy called Gaul and said the team really wanted to select him with its first pick.

But with the Galaxy picking last in the first round the coach wasn’t sure Gaul would fall to them.

“After that call, I was just really excited because that’s the best team I can possibly play for in America,” Gaul said. “I thought it’d be unbelievable if I could play for them.”

Surrounded by teammates in the Bradley locker room, Gaul anxiously waited for his name to pop up on the computer screen.

One-by-one each team made their selection. After what seemed like an eternity, it was the Galaxy’s pick.

“My computer was slow loading so it was stressing me out,” Gaul said. “All of a sudden my name popped up for the LA Galaxy. It was incredible. It was a great feeling.”

Gaul spoke with the coaching staff not long after and was excited to get out to Los Angeles.

The Galaxy are in their second week of preseason training and Gaul is quickly learning that being a professional is a lot different than playing in college.

“You see how hard the guys work because it’s their life,” Gaul said. “Some of the guys have families, it’s a really different outlook. From the first day of the preseason, you shake everyone’s hand in the morning and greet everyone. They make you feel like family when you walk in the locker room.”

Gaul said he is awestruck about being teammates with David Beckham, Landon Donovan and Robby Keane, who have all played at the highest level in club and international play.

“Bruce Arena is probably one of the greatest coaches in United States history, which is unbelievable,” Gaul said. “So to be around all of those people is just really great.”

Now that Gaul has reached the professional ranks, he credits Bradley for helping him improve not just as a soccer player, but also as a person.

“I definitely improved my maturity and became more of a leader,” Gaul said. “I owe that to the coaching staff obviously and the older guys who helped me in my first few years.”

With his college career in the rearview mirror, Gaul is focused on making the most of his boyhood dream that after years of hard work and sacrifice has finally become a reality.

“I definitely want to be a starter and play all the time,” Gaul said. “I’d eventually like to go to Europe and play for a top team over there. But at the moment, I just want to get my playing time and work as hard as possible and be successful for this club.”