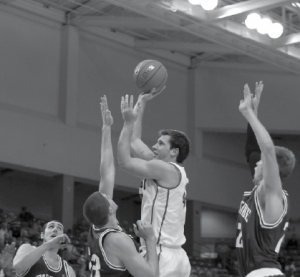 For sophomore center Jordan Prosser, the 2010-2011 season ended a game short. Going up for a routine rebound, Prosser got hit in mid-air and came down in a grotesque fashion.

“Upon landing, my body went one way while my leg just buckled and went the other,” Prosser said.

Laying on the Scott Trade Center floor, screaming in agony, Prosser had suffered a dislocated kneecap as the arena sat in silence.

“I didn’t have any structural damage to the knee, so it was a matter of getting my legs stronger,” Prosser said. “Our trainers knew exactly what to do and what day I should be doing things.”

For Prosser and the team, this offseason brought change with Geno Ford replacing Jim Les as Bradley head coach, but the transition was made easier by an unsung hero of the basketball program.

“We still had a coach here to keep all of us from going wild,” Prosser said. “Coach Willie Scott was here to help us through the change. Even though we didn’t have many workouts, we still got in and lifted while getting some shots up.”

It would be hard to ignore such a big change in the program. Les was their leader, so Prosser and the team scoured their connections to stay in tune to the hiring process.

“During the change, the team and I were always reading the newspapers more than before,” Prosser said. “We tried to ask President Glasser and Dr. Cross as many questions as we could to try and find out who was going to be our coach.”

What the team got in a leader is not much different in the bravado department, but Les and new coach Geno Ford can be seen as polar opposites when it comes to their on the court product.

“Coach Ford is shaping the team really well,” Prosser said. “He is allowing players to not feel robotic on the court.”

Les was notorious for a having a slow, grinding style of offense. Times have changed, and Prosser knows that Ford has a completely different mindset when it comes to basketball.

“We all feel more relaxed and not afraid to make a mistake,” Prosser said. “We are all playing with more confidence than last year.”

Prosser feels as self-assured as the team. Over the summer, Prosser put on some extra pounds of muscle.

With the added size, Prosser exudes a confidence that is needed for a big man in the Missouri Valley Conference. Even with Ford’s fast-paced offensive style, Prosser knows he can keep up with anyone.

“I feel like I can run the floor pretty well for being so big,” Prosser said. “I think we all have a little more freedom to run and get out to push the ball.”

With senior center Will Egolf out for the season, Prosser has inherited the role of team anchor, the big guy who always seems to find a way to score. Being that Dirk Nowitzki is the player he likes to emulate the most, Prosser is confident he can play the anchor position better than anyone.

“Dirk is such a versatile player. He can go inside and out at will,” Prosser said. “I feel like I can play inside as well as hit the 17-footer when needed.”