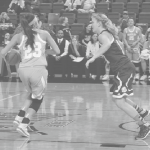 The transition from high school to college can be difficult, as most students need time to adjust to the college scene.

But when it comes to freshman student-athletes, some people may be demanding more time of anyone beginning their college career.

No one knows that more than women’s basketball guard Leti Lerma.

“At first it was a little difficult,” Lerma said. “I was having trouble balancing school and basketball; they kind of laid out my schedule for me and helped me get used to the routine.”

Fortunately for Lerma, she was able to find that balance and found her way on to the starting line up as a freshman.

Lerma found her way onto the court, even after missing the entire summer women’s basketball team program to play high school softball. In this program, freshmen learn the style of game Coach Michael Brooks teaches.

“That [camp] would have been something I wish I could’ve had, of course,” Lerma said. “It would’ve been an opportunity to learn and to progress faster, and I think that would’ve helped a lot earlier in the season.”

Seeing Lerma trying to make up for lost time also taught Brooks what the summer program means to incoming players.

“It’s been a great year for me as a coach because I’ve also learned some things about our summer preparation and what it does for kids,” Brooks said. “The things that she can learn in the summer time, getting in here right away, finding out our system, understanding what it is we want to do is invaluable. Unfortunately she wasn’t able to get that at all.”

Brooks said the main point Lerma missed in the summer was that he wanted her to play a different position.

“We asked her to work on her ball handling,” Brooks said. “[We wanted her] to move from playing more of a guard role in high school, to being a little bit more of a wing-forward type breed because she gives us more flexibility to be able to have match ups.”

Even though Lerma was learning for the better part of the first portion of the season, she eventually broke into the starting five and began contributing like an upperclassman.

“For us, a player is a player,” Brooks said. “We just want you to be able to do the things that we say work as hard as you can everyday, and those are the things Leti has shown us throughout the season.”

Lerma’s biggest games in a Braves uniform came in conference play this year against MVC opponents.

She set a Renaissance Coliseum record with 19 rebounds in a game against Loyola.

Against Illinois State, she forced a steal that prevented an attempt at a game-winning shot and sealed the win.

For a young player like Lerma, making key plays and having big games builds confidence, which she said is key to becoming a better basketball player.

Lerma also said that she’s ready to use the lessons and confidence she found this year to help the incoming freshmen next year.

“I want to help better the program and help us have more success,” Lerma said.

While Lerma has only begun her college career at Bradley, she’s already started to put herself into a position to be an important player for years to come.