MacKenzie Westcott leads Braves on and off the floor 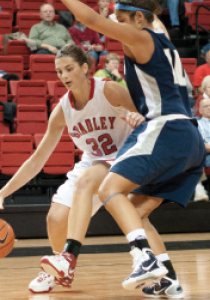 In the breaks of a basketball game, there are countless outcomes that can’t be controlled by the players on the court. Ricochets and bounces can change the outcome of any game. The only constants are hustle and effort.

Senior forward MacKenzie Westcott epitomizes both of those things on the basketball court.

“I have the mindset every game to have the correct attitude and give the maximum effort I can give,” Westcott said. “I get my energy from my team because I know they have my back and are toughing it out right along side of me.”

The faith she shares in her teammates isn’t a one way street. Her teammates know Westcott is going to do every possible thing on the court to get a win.

Leading the team in steals and blocks last year, Westcott shows a tenacity that would make anyone want to follow her to victory.

“My main role on the team this year is going to be promoting consistency. That has been one of our major downfalls in recent years,” Westcott said. “Everybody has a role to play. My hope is that I fill mine and show others how to accomplish theirs.”

Within a team, there are many roles to be filled. The main advantage for this Braves team is that they have five seniors filling all five of those roles.

“Having senior leadership is extremely advantageous from many standpoints,” Westcott said. “The seniors have stepped up enormously this year into leadership roles by taking action and encouraging accountability.”

Accountability is something the Braves need this year if they are to build from last year.

The 2010-2011 team lacked a consistency that would help pilot a team through a winning season. The last game of the season, a 37-point drubbing at the hands of the University of Northern Iowa, may have been a inner defeat to a team, but it was the launch of a commitment to accountability for Westcott and the team.

“We have talked about this season for a long time, actually starting not long after the UNI game last year,” Westcott said. “As a team, we knew we had to do something to make this upcoming season different, and ultimately, more successful.”

“I expect us to sell-out for each other every night so we can be in the best position to win games,” Westcott said. “Overall, I believe we can be at the top of the conference and into post-season play if we buy in to the process and stay accountable for one another.”

Under the tutelage of 12 year head coach Paula Buscher, the team should have a constant spark off the bench to help them reach that state of accountability.

“On the court, she stresses communication as being a constant force that will keep teams competitive in games,” Westcott said. “Also, her fiery spirit shows us that she is passionate about her role on the team and it makes us want to work harder.”

You ultimately control how hard you work. Westcott knows that as well, but her efforts are never for herself. The slides and the dives she takes chasing down the ball aren’t for her, there is no hustle play stat in the box score, they’re for the team.

“I want to be remembered as a person that served others. Hopefully people will be able to say I inspired my teammates to challenge the way things are and believe in themselves,” Westcott said. “Basically, I want people to say I helped others become the best they could be.”