March on: Braves fall to Drake in final game before MVC tournament 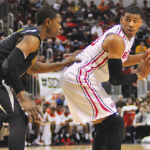 Going on the road has been an unfriendly experience for the men’s basketball team this season.

Prior to their matchup against Drake on March 1, the Braves had gone 1-11 away from Carver Arena.
The trend of losing continued as the Braves, despite once holding a 12-point lead in the game, could not stop Drake’s Aaron Hawley and fell 71-66.
Hawley led all scorers with 23 points and helped key a 10-3 run for the Bulldogs in the final four minutes of the game.
The Braves had many opportunities near the end of the game but could not hit the key shots to get back in it.
Senior Walt Lemon Jr. led Bradley with 20 points, which put him in eighth place on Bradley’s all-time scoring list. Senior Tyshon Pickett led the Braves with nine rebounds and now ranks third in the Missouri Valley Conference (MVC) in rebounding this season.
Coach Geno Ford said it was a tough game even though his team had a large lead, but he also said he knows that his team can come back from the loss.
“It was a disappointing loss,” Ford said. “We had a chance to steal one on the road and they chipped at our lead and we couldn’t get any offense or defense working for us down the stretch.”
Ford also said that heading into the MVC tournament in St. Louis, the team will bounce back from the loss. He noted that the games are on a neutral court with neutral fans and anything can happen.
“We are going to have to have the mentality of resilience in the tournament and we can’t worry about anything that happened before these games,” Ford said. “Our record is wiped clean because this is now a new season and we are fighting for our lives.”
The Braves opened the 2014 MVC tournament against Loyola in the play-in game on March 6 in St. Louis. The Braves are 2-0 against the Ramblers this season.
When asked about Loyola, Ford said he has enjoyed a perhaps new rivalry in Illinois, especially in the MVC. But he said his team needs to have a special performance to continue in the tournament.
“I think they give us a great challenge and we need to have a great game defensively and hit some key shots if we want to win,” Ford said.
The winner of the Bradley-Loyola match will play no. 2 seed Indiana St. on March 7.

For the latest news, scores and updates be sure to follow everything Bradley men’s basketball this weekend with live updates from the MVC tournament in St. Louis on Twitter with our Sports Editor @AaronFreem.