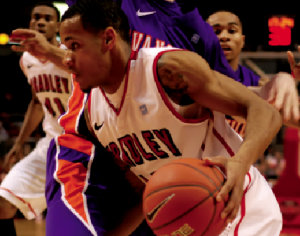 Fans have reasonably been upset after two consecutive 30-point losses in conference play. Wednesday, the Bradley men’s basketball team brought fans to their feet and excitement back to the Hilltop with a 68-60 win against Indiana State.

“We seem to be understanding what it takes to get this thing turned around, and it makes you keep believing that it’s eventually going to happen, it’s just a matter of when,” coach Geno Ford said. “We did a good job, and guys are battling and fighting.”

Sophomore Walt Lemon Jr. paved the way for the Braves off of the bench, tying a career-high with 26 points, including shooting 15-for-16 at the free throw line.

“I figure coming off the bench is a way for me to just calm down and see what’s going on in the game,” Lemon said. “Then when I get in the game, I can just play and not worry about messing up.”

Bradley led most of the game after two straight losses without holding a lead. Sophomore Jordan Prosser fell one rebound short of a double-double with 11 points and nine boards. Freshman Jalen Crawford added nine points in his first career start with three 3-pointers.

“It’s a huge confidence boost to lose by those margins, and come back and get a win against a good Indiana State team that went to the [NCAA Tournament] last year,” Crawford said. “It’s a huge boost to our team, confidence for the rest of the season and hopefully we make a run into the MVC [tournament].”

Wednesday’s win comes after an embarrassing defeat Saturday. Bradley fell to Interstate-74 rival, Illinois State 78-48. The Braves never led and were down by as much as 50 in the second half.

“It means a lot [to earn the win], after the Illinois State game, we’ve been working hard in practice,” Lemon said. “This is the hardest we worked all year.”

“We have a long way to go, it’s far from over and we need to keep getting better because it was fun tonight,” Ford said.

With the win, Bradley improves to 7-19 and 2-12 in conference play. The Braves will face Missouri State on the road at 2 p.m. Sunday. Wednesday, they will return to Peoria to face Drake at 7 p.m. in Carver Arena.