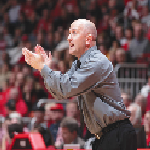 Bradley coach Geno Ford’s first season as the leader of the basketball program did not go exactly as planned.

The Braves had the most losses in school history and an overall record of 7-25. But with the majority of the team back and the addition of several players, Ford said he believes the team has made significant strides.

“I think we’re much better than we were [last year],” he said. “If this year’s team played last year’s team, we’d win by 20. The bad news is last year’s team is not on the schedule. It’s been a group where the seniors have set the tone with effort and energy. I think everybody has a better handle on what we’re trying to do on both ends of the floor.”

Bradley returns seniors Dyricus Simms-Edwards and Jake Eastman. Simms-Edwards started 31 of 32 games last season and averaged just over 11 points per game. Eastman was fifth on the team in scoring in 2011-12 and should be a valuable three-point shooter this year.

The Braves frontline will also be bolstered by the return of sixth-year senior Will Egolf, who missed last season with his second ACL tear.

Ford said Simms-Edwards, Eastman, and Egolf have emerged as leaders for this team.

“You need the veterans to do a couple things,” he said. “You need them to lead but it’s not about leading by example when you’re an upperclassmen. Leading by example means you’re not talking and we need guys to lead vocally and then back it up with actions. You have to have both.”

Bradley also returns junior Walt Lemon Jr. who was the team’s second leading scorer a year ago at just over 12 points per game. Juniors Jordan Prosser and Tyshon Pickett, a transfer from Dodge City Community College, should play major minutes in the frontcourt.

With more depth this season, Ford said practices have been a lot better in his second season.

“The competitiveness in practice has been much, much better,” he said. “We do feel like our guys throughout the course of the season should be able to get better because practice should be competitive on a daily basis. We have an exhibition game in less than a week and I couldn’t even tell you a starting lineup. That’s a good thing.”

The Braves will begin its 2012-13 campaign Monday with their first exhibition game against Upper Iowa at the Arena. The team will play one more exhibition Nov. 3 against Wisconsin-Parkside at the Arena before opening the regular season Nov. 9 against Eastern Illinois at Carver Arena.