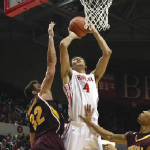 The men’s basketball team opened its 2013-2014 season with four home games in eight days. With many new transfers, three freshmen and a potential Missouri Valley Conference “Player of the Year” candidate, the 2013-2014 Braves team was in for a very interesting beginning of the season and wanted to live up to the high expectations.

When the Braves opened the season against Jacksonville State Nov. 8, the Braves expected to have a strong start from their star, senior guard Walt Lemon Jr. The opposite occurred on opening night, when Lemon was found shooting 20 percent (2-10) from the field.

That is when sophomore transfer Guard Omari Grier (17 points) and senior forward Tyshon Pickett (15 points) helped carry the team to a 72-65 victory over Jacksonville State.

Coach Geno Ford said he was proud of how his team reacted to Lemon Jr. having an bad shooting night, which proved to him how well this team can handle adversity.

“I thought that based off of the exhibition season that Walt would be able to do all of these things,” Ford said. “But I think a lot of guys stepped up tonight which should show us that we can still do well if our star performer doesn’t have the greatest game.”

With a quick turnaround, the Braves headed back on campus to Renaissance Coliseum on Sunday night to host the Alabama State Hornets. The Braves found themselves in a similar position as they were in the first game with Lemon Jr. falling into early foul trouble and Ford having to sit him.

Grier pointed out that he and his teammates need to step up even more if Lemon Jr. cannot be on the court.

“If Walt does have any foul trouble it is up to Auston [Barnes] and I to step up as leaders on this team,” Grier said. “I think for the most part we did step up both offensively and defensively.”

The Braves had another quick turnaround on Tuesday when they played Central Michigan in a game that would be the first of four without senior Jordan Prosser, who was suspended four games for violating university and athletic department standards.

The Braves then came out strong against Central Michigan opening a 12-2 lead early on in the first quarter and never looked back on their way to an 80-70 victory.

Lemon Jr. finished the game with a game-high 20 points.

With Prosser out, freshman Xzavier Taylor stepped in for Braves and played large roles in the victory.

The Braves have a big weekend ahead of them as they play Chicago State 7 p.m. Friday as part of a doubleheader featuring, the women’s team playing after at 9:30 p.m. at the Civic Center. The Braves then travel to Champaign, IL to visit the Fighting Illini of the University of Illinois at 5 p.m.

For the latest news, scores and updates be sure to follow everything Bradley Basketball on Twitter with our Assistant Sports Editor @AaronFreem.