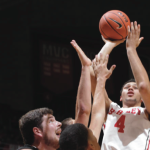 After falling to their I-74 rival Illinois State on Feb. 15, the Braves looked for a rare season sweep and, more importantly, a road victory against Southern Illinois.

Yet again the Braves could not capitalize on an early lead, and foul trouble from the whole team eventually caught up to the

Senior Walt Lemon Jr. finished with 17 points and six assists on the night and moved into rare company. His first assist of the night made him the fourth player in Missouri Valley Conference (MVC) history to total 1,600 points, 350 steals and 200 assists in a career. He joins Bradley great Hersey Hawkins along with MVC legends Larry Bird and Darren Brooks in the exclusive club.

Coach Geno Ford said he knows that with the season com- ing to an end soon, he needs every facet of his team to per- form.

“The bottom line is that we are not getting production from enough places,” Ford said. “When other guys step up, we play well, but when we only get two or three guys to step up for us, we find ourselves looking*for answers.”

But with five Bradley players having at least three or more fouls, SIU found itself shooting free throws for most of the sec- ond half and didn’t look back.

With the festivities of a new mascot before the game on Feb. 22 against Loyola and the last unbeaten team in the country coming to Peoria on Feb. 25, Ford said he is keeping his team on track.

“We have to focus on the task at hand,” Ford said. “We have a chance to sweep Loyola, which is something we couldn’t capitalize on with two other teams [Southern Illinois and Illinois State].”

The Braves face Wichita State on Tuesday. Ford said that he and his team have the chance to do something special.

“At some point you get beyond the excitement and go

out there and play,” Ford said. “They are big and physical and we have show a lot of toughness, which we have seen in spurts in order to be there at the end.”

The Braves will play their last two out of three games of the sea- son at the Civic Center with the first at 7 p.m. on Feb. 22 against Loyola. Then, at 8 p.m. Feb. 25, the team takes on Wichita State.