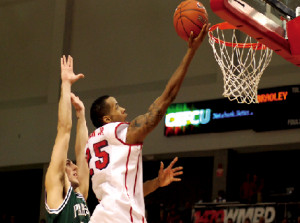 The Bradley men’s basketball team opened its season with an exhibition win over Division II Upper Iowa 68-54 Monday night at the Renaissance Coliseum.

In his first game action since March 2011, senior Will Egolf scored a game-high 16 points and connected on 4-of-5 3-point attempts to lead the Braves. Egolf missed all of last season with his second torn ACL injury in his Bradley career.

“I thought Will for a first game back was really sharp,” Bradley coach Geno Ford said. “He fumbled a couple of balls that have typically led to layups for him in practice and we know he’s going to finish them. I’m sure that’s first game jitters, which is natural when you haven’t played a game in 18 months. I think as he gets his legs under him he’s going to get better and better.”

Bradley led Upper Iowa by just three points 31-28 at halftime. Ford said he challenged the team to be more aggressive in the second half and the Braves responded.

“I think we played okay for our first game,” senior Jake Eastman said. “In the first half we were a little bit timid…[we] had some good shots, they just weren’t falling. I think we saw in the second half, if we play with energy and we defensive rebound, we can get out and run and take advantage of some easy looks.”

Senior Dyricus Simms-Edwards led the second half charge, connecting on back-to-back threes in the first five minutes of the half. The Braves shot a sizzling 10-for-17 from three and 55 percent overall.

“We shot the ball really well,” Ford said. “I thought we got really good shots. We had 16 assists for 25 baskets, which is a great number. We were sharing the ball. If you take good ones [shots] you’re going to shoot a better percentage and we were able to do that.”

Eastman, Simms-Edwards and junior Walt Lemon Jr. all joined Egolf in double-figures with 11, 12 and 15 points, respectively.

Eastman said he can already see a major difference between this year’s squad and past teams he’s played on at Bradley.

“I think one of the biggest things this year…the team chemistry is very high,” he said. “People dive on loose balls and the whole team is going to pick the guy up. It’s probably something I haven’t seen the past three years I’ve been here.”

The Braves will play in their final exhibition game at 1 p.m. Saturday afternoon at Carver Arena against Division II Wisconsin-Parkside. The team will open its regular season next Friday against Eastern Illinois at Carver Arena.