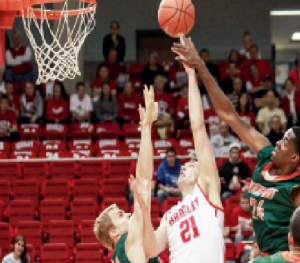 The Bradley men’s basketball team notched another impressive victory defeating Texas-Pan American 78-61 Monday night at the Renaissance Coliseum to move to 2-0 on the season.

The Braves were paced by four players scoring in double-figures and shot a solid 48 percent from the field, while tallying 22 assists on 27 made baskets. BU also turned the ball over just nine times and forced UTPA into 18.

“Those numbers are off the charts,” Bradley coach Geno Ford said. “We really valued the ball. Good teams do that. It should give us a little confidence doing it against a team that presses as much as they did.”

Bradley used a late 11-2 run at the end of the first half to open up 37-24 halftime lead. But in the second half the Braves couldn’t shake off the visiting Broncos. Every time it looked as if BU would expand the lead to 20, UTPA would make a run.

“You got to learn how to grind out wins,” Ford said. “If you’re going to win you’ve got to be able to do that. We didn’t play unbelievably well in the second half, but I’m going to give them credit and say that it wasn’t just us. Some of it was obviously them.”

The Broncos cut the lead to 11 with just more than five minutes remaining, but senior Dyricus Simms-Edwards responded with a layup and senior Will Egolf drained a 3-pointer.

“We knew they’d make a run at some point,” Simms-Edwards said. “It was about us not losing our composure and doing what we do best, which is moving the ball around and taking good shots.”

Egolf had 14 points and connected on three 3-pointers despite being in foul trouble for most of the night. He fouled out after playing just 22 minutes. Junior forward Tyshon Pickett also battled foul trouble, scoring just three points after racking up 23 points in his BU debut.

With their two starting frontcourt players on the bench for much of the game, the Braves showed its improved depth from a season ago. Junior Jordan Prosser and sophomore Shayok Shayok combined for 16 points and 11 rebounds off the bench.

“We’ve got four good bigs,” Ford said. “We really feel that way. As long as our bigs keep battling in practice…those guys go at each other every day and I think that’s why when they get in the game they’re not scared of contact. We’re much more physical.”

The Braves will head on the road for two games before returning home Nov. 24 for a contest at Carver Arena against Tennessee-Martin.