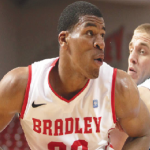 It wasn’t always pretty, but the Braves did their job in the preseason ahead of tonight’s regular season opener.

“We need to shoot the ball a little better,” Coach Geno Ford said. “It’s going to be important that we make some shots from the perimeter.”

Bradley was just 1-for-11 from three-point range against the Bobcats, though the team shot 49 percent from the field overall.

The Braves looked like they were going to blow WVW out of the gym after leading 64-44 with just over eight minutes left. But the Bobcats fought back and cut the lead to single digits in the final minutes.

“We have so many lessons to learn as a team,” Ford said. “Obviously, one of them is finishing people off. When we got up 20, we became jump shot heavy. We were taking some quick trigger jumpers. We need to get that corrected because when you’re up … that’s not good offense.”

For the second consecutive game, Walt Lemon Jr. put the team on his back. The senior guard scored a game-high 33 points and finished the exhibition season with 71 total points, while shooting 62 percent from the field.

Lemon was able to use his superior quickness to get to the rim and finish against WVW.

No other player finished in double-figures, but sophomore Omari Grier had nine points and five rebounds. Senior Tyshon Pickett chipped in eight points, while junior Auston Barnes had six points and six boards.

The Braves dominated the Bobcats inside with a 48-14 advantage in points in the paint, but they weren’t able to take advantage of their height. The team only won the rebounding battle 33 to 29.

But none of that matters as the Braves will face their first Division I competition of the year at 7 p.m. tonight at Carver Arena against Jacksonville State. The Gamecocks play in the Ohio Valley Conference and were 17-11 overall last season.

Lemon said the Braves will be ready for Jacksonville State, but the team still has a lot of work to do as the year progresses.

“I’m not saying we’re ready. We’re not where we want to be,” he said. “But it’s a work in progress from the last game. Even though we won, no one was going around like we’d arrived… but we’re heading in the right direction.”

Bradley opens the season with four home games in a week before heading on the road to face in-state opponent Illinois Nov. 17.