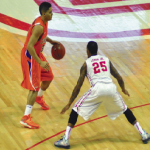 With a chance to gain some separation in the Missouri Valley Conference standings, the men’s basketball team took on second place Indiana State Wednesday night at the Civic Center.
Unfortunately, due to a poor free throw percentage and a hot shooting Jake Odum for Indiana State, the Braves fell 68-62 to the Sycamores and now sit in a four-way tie for fourth place.
The Braves went into Wednesday night’s contest riding a four home game conference winning streak after Sunday’s 83-66 victory on Breast Cancer Awareness Day. Sunday’s game saw senior Walt Lemon Jr. drop a game-high 25 points and freshman Xzavier Taylor tally his first career double-double (14 points and 11 rebounds).
But the Braves could not handle Odum and the Sycamores who scored a team-high 27 points and set a school record by going 13-13 from the free throw line.
Bradley Coach Geno Ford praised the Sycamore star and said the Braves threw everything they could on him, but could not contain him.
“He needed to play big for them tonight, so he did,” Ford said. “There aren’t enough superlatives that can explain how good he is.”
As the Sycamores set records for free throws, the opposite could be said of the Braves’ free throw abilities.
The Braves went 1-5 from the free throw line in the first half and finished 9-17 (53 percent), which is well below their season average of 70 percent. The Braves also struggled from the three-point line, shooting only 5-17 (29 percent).
Senior forward Tyshon Pickett said he knows that the Braves can be better from the free throw line, but he also notes that shooting free throws is all part of the mental game and can be easily fixed.
“Free throws are just mental, that’s all it is,” Pickett said. “It is about taking your time and focusing, but we struggled tonight.”
The Braves kept it close in the first half, but big men Taylor and junior Auston Barnes both committed two fouls and had to sit towards the end of the first half. That is when Indiana State went on a 12-1 run to close out the first half and take a 27-20 lead into the locker room.
As the second half carried on, the Braves stayed close with the Sycamores and even took a 42-40 lead with 9:52 to go in the game. But as the game went back and forth, the Braves had no answer for the Sycamores’ Odum.
With 4:03 left in the game, Odum and Indiana State’s Khristian Smith hit back-to-back three pointers to put the Braves away for good.
The Braves now head on the road to face Illinois State for round two of the I-74 rivalry on Saturday for a 6:00 p.m. tip. For play-by-play updates from the game, follow @AaronFreem on Twitter.