No. 25 Braves upset by Western Michigan 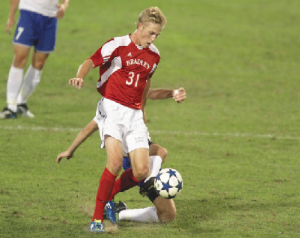 Gone is a talented senior class that led the Braves to two consecutive trips to the NCAA tournament, including a berth in the second round a season ago.

Bradley features 11 newcomers, nine of which are freshmen, but that hasn’t deterred expectations as the Braves came into the season No. 25 in the rankings.

The team’s inexperience showed in the first two games of the season. After defeating in-state rival Eastern Illinois 2-0 last Friday, the Braves lost to Western Michigan 2-1 on a golden goal in extra time.

Eighteen different players saw the field in the first two matches, with seven playing in their first game for the Braves.

In years past Bradley has excelled in winning one-goal games due to the experience of its roster. This season, DeRose said that will be the challenge for this new team.

“On Sunday [against Western Michigan], we missed a couple of really good chances,” he said. “We’re going to have to evolve there. When you see us struggle it will be because we just aren’t experienced enough, but that will happen in time.”

Despite the team’s youth, two upperclassmen stepped up in a big way. Senior Jochen Graf scored all three of the team’s goals with junior Wojiech Wojcik making the assist on each score.

“They’ve played great,” DeRose said. “I think the next phase of their development is the vice-versa. It’s Jochen being a little bit of a provider and [Wojcik] getting some goals. We’re going to have to score by committee.”

DeRose said he has high hopes for the team as the season progresses. The return of sophomore Desmond Campbell from an ankle injury should help improve the attacking. If there’s one thing the team can improve on it’s being aggressive in the first half of games, he said.

“I think veteran teams are able to impose themselves from the opening whistle,” DeRose said. “If you look at us in the first two games we’ve been much better in the second half. So I think when you’re young and you’re new there’s an apprehensiveness when games start off. We want to start a little faster.”

Bradley returns to campus at 7 p.m. Friday at Shea Stadium against Hartwick.