Ousted: Braves fall to Loyola on buzzer-beater to end season 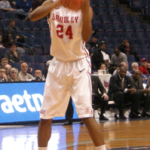 Bradley is no stranger to the Thursday “play-in” game at the Missouri Valley tournament in St. Louis. This was the Braves third time in the “play-in” game while under Coach Geno Ford and the Braves have only won once in the opening game of the tournament.

But the Braves had a favorable matchup at this year’s tournament as their first game matched them up against Loyola (Chicago), a team in which the Braves won both regular season games against.

This night was different and the Braves came out with little energy in the first half that had Bradley looking at an eight-point deficit and eventually fell 74-72 on a half court buzzer-beater by Loyola’s Milton Doyle.

The Ramblers came out on fire from behind the three point line by shooting 6-8 (75 percent) and controlled the tempo of the game throughout the first half.

But seniors Walt Lemon Jr. and Tyshon Pickett were not ready for their collegiate basketball careers to end. Lemon and Pickett came out in the second half with a strong passion that had the whole Braves’ bench fired up.

Pickett finished with 25 points and 7 minutes while playing the whole 40 minutes of the game.  Lemon was right behind Pickett by finishing with 24 points and shooting 10-10 (100 percent) from the free throw line.

With the Braves down 71-70, Lemon went to the line and sunk two free throws to put the Braves up 72-71 with 4.8 seconds left. That is when Loyola called a timeout and drew up a play that had Doyle sinking a half court three pointer to end the Braves season.

Afterward, a visibly upset Lemon tried to sum up his emotions.

“I’m just at a loss for words,” Lemon said. “I wasn’t ready to go home and I was planning on being here for four days.”

Lemon also said that even when his team was down he wasn’t trying to put the team on his back, but he just wanted to fight to stay at the tournament.

“Actually I wasn’t trying,” Lemon said. “We were down, so I made it an issue to make myself be more aggressive.”

Ford also tried to sum up the emotions in the locker room. Ford said that this was an up and down season for the Braves and that there is much promise for the future, but still ending the season on a buzzer-beater is not the way he had in mind to end the season.

“I thought it was a tough year, but we are excited about the guys we’ve added” Ford said. “But that doesn’t make it any better tonight as you sit here after an emotionally draining game that you’ve got to give Loyola credit for.”

The Braves finish the season 12-20 overall and 7-11 in the MVC. Ford also noted in the press conference that guard Omari Grier will have surgery on his ailing hip in a few weeks, and should make a full recovery in time for next season.