Pack Carver Arena against No. 3 Michigan 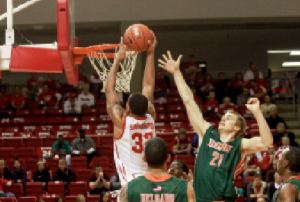 Tomorrow afternoon at 3 p.m. Bradley will host No. 3 Michigan at Carver Arena in the biggest home basketball game for the Braves in several years.

Michigan is the highest ranked non-conference opponent to visit Bradley in the history of the program.

No. 13 Michigan State was the last ranked non-conference team to come to Carver Arena during the 2008-09 season, defeating the Braves 66-61.

As a student, there is no excuse not to be at this basketball game. Working on upcoming projects or studying for finals can be put on hold. You can put away your Xbox controller for a couple hours to cheer on your school in its biggest basketball game in a long, long time.

If you’ve never been to a Bradley basketball game this is the perfect time. Get a group of your friends together and go. The tickets are just $1 with a Bradley ID. If you don’t have a car, a shuttle runs from the student center to the Civic Center starting an hour before game time.

It’s a good time and if you don’t like basketball it’s only a couple hours out of your day to support your school.

Carver Arena should be packed to the brim with students yelling and screaming to create a home court advantage. And it does make a difference.

After winning just seven games a season ago, the Braves are much improved and have raced out to a 5-1 start after beating Central Michigan 82-65 on Wednesday.

Bradley has more depth and is much more exciting to watch than in previous years.

Will they have enough to beat the No. 3 ranked team in the country? Probably not but with a strong crowd and a little luck anything is possible.

I think the Braves stay in this game and make it exciting at the end. Call me crazy if you’d like. I’m not going to go so far as to say they’ll win, but if it’s close at the end of the game the home court advantage can play a huge factor.

That’s why this team needs your support tomorrow. So cancel whatever you have going on and get to Carver Arena. You won’t regret it.