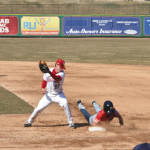 As good as the Braves looked through their first 20 games of the season, it’s hard to believe they would lose four straight games at all.

Not only have they lost four, they managed to lose three of them in spectacular fashion.

Let’s start with the March 28 game against Dallas Baptist. The Patriots came into the weekend outside the top 50 in numerous offensive categories, but that night they pounded out 17 runs on just 12 hits.

How did they do it? Well, Bradley helped. A lot.

The Braves walked 11 batters and hit eight more, two shy of the NCAA record 10. Starter David Koll didn’t record an out in the inning, and was pulled after walking three and hitting a batter to drive in a run.

“It’s not physical issue or anything like that. It’s especially bad for David [Koll] though, because he’s been one of our more consistent strike throwers this season,” Corbin said.

On Saturday, it was second baseman Chris Godinez’s turn to be in the doghouse, since at times it looked like he left his glove in the dugout.

He made four of the Braves’ five errors, including two on one ground ball. After booting it initially, he recovered in time to throw it offline to first base, pulling Elliot Ashbeck off the base.

Bradley lost to the Patriots 8-2, and if it wasn’t bad enough for Godinez, he failed to get a hit from the leadoff spot, causing him to be moved down in the order for Sunday’s series finale. But, Assistant Coach Sean Lyons said that’s not a permanent solution.

“We wanted him to get more fastballs. We don’t really feel like keeping him down there long-term, we want him back at the top of the lineup,” Lyons said.

It worked, to an extent. Isaac Smith led the game off for the Braves with a home run, but they were already trailing 2-0 before that. Godinez went 3-5 from the nine spot, but it wasn’t enough, and the Braves fell 9-7 and were swept in their home opener.

For the weekend, Bradley pitchers tallied 23 walks with 12 hit batsmen. They surrendered 34 runs in 26 innings, leaving them with a team ERA of 11.77 for the weekend.

Things got a little better Wednesday against the Hawkeyes. David Koll started for the Braves and pitched six innings, but Bradley’s offense again went silent, and the team fell 6-2.

“We had some chances,” Lyons said. “But they were able to stop us. That’s just how the game goes sometimes.”

The team heads to Carbondale to open up a three-game series from April 4-6 against the Salukis of SIU. After a matchup against SIU-Edwardsville April 9, the Braves return home April 11 to face Missouri State.